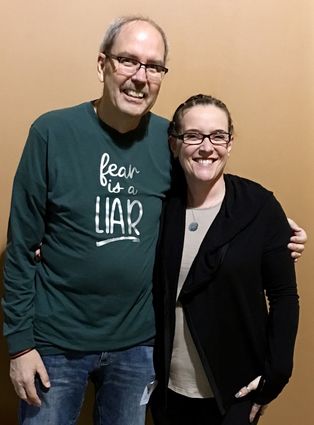 Bob Keesy's kidneys were failing so he asked for someone to give him one of their kidneys. One way he asked was a huge banner on the fence behind his house in Niwot which read, "Bob needs a kidney." He just needed one kidney, but lucky Bob was offered two. UC Health sorted it out and transplanted the one that matched him best. It was a gift from Frankie Dubar-Nelson.

Almost four months after surgery, both donor and recipient are back to their normal lives. Dubar-Nelson is doing "super-good" she said. She was able to do her usual activities two weeks post-surgery, aside from the usual precautions doctors put on lifting.

"If more people knew how easy it was," 41-year old Dubar-Nelson said, "more people would do it. If my kidney regenerated like a liver does, I'd do it again."

When Dubar-Nelson's son Gavin was diagnosed with acute lymphoblastic leukemia three years ago at age 12, her friends and community didn't hesitate to jump in, providing house cleaning, meals, and transportation for the family of five. Gavin was cancer-free within a month of treatment and is still in remission. Dubar-Nelson was so touched by the outpouring of support that going forward, she wanted to be the one to give. So when she received a flyer from her son's school saying that a student was in need of a kidney transplant, her immediate reaction was to see if she was a candidate. UC Health determined through its in-depth screening process that she was.

Simultaneously, Marc Kammerzell, who knew Keesy through church, had stepped up to see if he could donate his kidney to Keesy, and after screening, he was approved.

UC Health doctors determined the two healthy potential donors' kidneys would fare better if the recipients were swapped, and asked if Kammerzell and Dubar-Nelson were willing to redirect their kidneys to different recipients than they initially intended. They both agreed, and because of hospital privacy rules, Kammerzell knew he would not be giving his kidney to Keesy, but he didn't know who it would be going to, and Dubar-Nelson knew she had been matched with a new recipient, but she didn't know who that would be.

Dubar-Nelson, who lives in Broomfield, hadn't met Keesy. But Dubar-Nelson did know Kammerzell, also through church. Not until Dubar-Nelson and Kammerzell talked did they realize they were scheduled to undergo surgery on the same day at the same hospital and putting it together, the two donors knew who was giving and getting whose kidney. They also learned, that all but the young lady who was to receive Kammerzell's kidney, attended the same church, and had many mutual friends.

The foursome was scheduled to have surgery on June 22, 2018, but sadly learned the day before that the young lady who was to receive Kammerzell's kidney was not well enough to undergo an operation. Dubar-Nelson was asked if she wanted to proceed and she agreed to do that.

"I just couldn't not do it," Dubar-Nelson said. "He [Keesy] was to the point that he was going to have to start dialysis if he didn't get a kidney soon. We didn't know how long he would have to wait if we cancelled."

"The hardest thing was not being able to eat for 24 hours after surgery," Dubar-Nelson said about her surgery. "The staff was amazing and very catering. Every time I hit the call button, someone was there. No question was left unanswered. I had surgery Friday morning and went home Saturday afternoon."

Sixty-six year old Keesy's recovery has not been as easy. Fourteen weeks of complications led to two-hour round-trip drives to and from UC Health for appointments that took four to six hours each. The count was 22 such visits to address severe anemia, painful water retention in Keesy's feet, legs, and ankles, and debilitating hand tremors.

"It took me a number of years of bad health before I had the transplant and during that time my health was gradually getting worse," Keesy said. As result of chronic kidney failure, Keesy was anemic and exhausted post surgery. To battle the anemia, he's undergone three transfusions and has had four injections of Procrit. His red blood cell count is now near the acceptable range and doctors believe his body functioning will kick in to continue that trend.

The water retention in his lower extremities was also a concern, and for the foreseeable future he'll continue to be on diuretic medication to address the problem.

Keesy has taken medication for bipolar disorder since the early 1980's and was familiar with the resulting side effect of hand tremors. An anti-rejection medication he was prescribed following the transplant severely compounded the level of tremors he suffered. He reached a point where the tremors made tasks like eating and typing impossible. As time went on, doctors changed his dosage level and the trembling has gone down.

Repeatedly traveling E470 to and from UC Health was a big strain, but running over a semi-truck's mirror flung in the middle of the road on Aug. 20 could have been disastrous. Fortunately, Keesy's son Greg, who was driving, was able to contain the damage to a shredded tire and some undercarriage damage, putting the car out of commission for a month.

Officially on the other side of the scary and frustrating issues following surgery, Keesy takes 16 medications a day and exercises caution because of his suppressed immune system. Otherwise doctors say he's cleared to live a normal life. He and his wife Paula care for their young grandchildren several days a week and Keesy is working on getting back to his normal walking routine.

"Sometimes you just have to be patient," Keesy said of the unexpected ordeal after his surgery. "By the fourteenth week, doctors said that every number was going in a positive direction. And now, four months since the surgery, things have just continued on."

Paula has been Bob's primary caregiver, accompanied by their three sons and many friends. Keesy is extremely thankful for their love and care. His goals now are to help others advocate for themselves when it comes to asking for a kidney transplant and to educate people about being a living donor.

Kammerzell, the original volunteer for Keesy, donated his kidney six weeks ago as part of a different chain of donors and recipients. He is doing well and back at work, according to Keesy. Thus far, the young woman who was to receive Kammerzell's kidney in June has not undergone surgery.

Dubar-Nelson said her most recent follow-up lab test results are excellent and her kidney function is strong and healthy.

"People tell me I'm a hero, but I don't want to be seen that way," Dubar-Nelson said. "I'm just a person who saw a need and helped to fill it. It's kind of humbling to see how much what I consider to be a small sacrifice really impacted so many people."