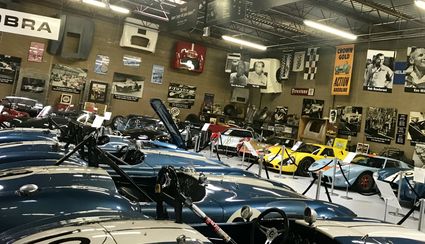 Shelby American Collection in Gunbarrel is home to the finest collection of Shelby-made cars and paraphernalia ever assembled.

What can hit 200 mph, has played a part in such beloved films as “Viva Las Vegas,” and has scads of international groupies? It’s the legendary Shelby Cobra and the Shelby Mustang.

Gunbarrel is home to a museum that goes above and beyond in honoring the engineering, elegance and triumphant history of the line of autos that racers completely obsess over. The world renowned Shelby American Collection is ironically located on a quiet and unassuming cul-de-sac, in a completely nondescript building. But it’s the contents of the building that entice avid race car aficionados and no doubt are capable of converting even the most lukewarm car enthusiasts into avid admirers just by virtue of the display of low-slung lustrous speedsters all angle-parked as if poised for the starting flag.

Backdrop layers of authentic memorabilia and photos of racing legends, along with the rumbling sounds of accelerating race cars banking turns on a large video screen make for a visceral experience. A camera mounted from the driver’s perspective allows onlookers a virtual ride in the speedy, bouncing car.

There isn’t another noteworthy assemblage of Shelby race cars and their accoutrements such as this anywhere in the world. From ceiling to floor, no detail is overlooked. There are banners, trophies, hood molds and even oil cans. The museum is a finely executed tribute to the heritage of the sport, the cutting edge of its participants, and the royalty of Shelby cars in the racing world.

The not-for-profit endeavor started 22 years ago in December 1996 with just 10 cars. Now around 40 priceless, gleaming cars are on display. Some are on loan from car collectors and others are owned by former racers Bill Murray and his brother Dave Murray.

“Between Bill and me, we’ve been working on race cars since 1966,” Dave said. “We were always into Cobras because they’re just the coolest cars out there.” In 1962 the Cobra was the first car to hit 180 miles per hour, besting Chevy Impalas, which were capable of 110 miles per hour.

The museum’s building is owned by car enthusiast Steve Volk, who along with car restoration expert Bill Murray (owner of Murray Racing in Longmont), started the museum after a little prompting from the man himself, Carroll Shelby, who said the quiver of cars already in Volk’s and Murray’s possession would be of interest to the public.

Shelby, an engineer by education, was a record breaking Bonneville salt flats driver, a Formula One racer and the winner of the 1959 24 Hours of Le Mans race. With his background he was a natural to become an automobile designer. He believed the foreign cars he’d driven could be improved by combining the light weight of a euro-style body with a V8 engine. Thus the Shelby Cobra was born. Rumor has it Matt Damon is slated to play Carroll Shelby in a big screen movie due out mid-2019.

For only $5 admission, the timeline of Shelby’s creations and their subsequent successes are right before your eyes at the museum including the likes of the muse car, AC Aces, the very first Cobra, and the GT models that followed.

Only 122 GT40s were ever made and 100 of those survived racing. The museum has 10 of them on exhibit. Some of the winningest high performance cars may be ogled at the Shelby American Collection in addition to a car owned by Steve McQueen, the car Elvis and Ann Margaret road in in Viva Las Vegas, and the last Cobra to win a professional race.

On Saturdays, the only day the 10,000 square-foot building is open, some 100 gawkers from as far away as Timbuktu are likely to come through the door, according to Dave. Racing historians can easily spend hours exploring the museum.

“Almost any day you come in here, we have five to 10 people from out of the country and mostly out of Colorado,” Dave said. “People come here specifically because it’s the biggest Shelby museum in the world. Nobody could put anything like this together because we have the best cars in the world, the ones that won the races especially.”

Every September the museum holds a fundraising event and some lucky person wins a car. This year they gave away a $75,000 GT350R. Every donor to the museum is automatically entered into the drawing.

The museum also has a unique gift shop with hard to find books, posters and t-shirts. Open Saturdays from 10 a.m. - 4 p.m., it’s located at 5020 Chaparral, Gunbarrel, CO 80301. Admission is $5. To learn more and to make a donation, visit: ShelbyAmericanCollection.com