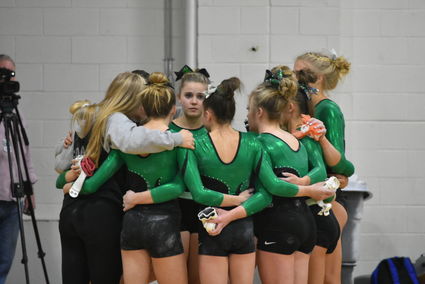 The Niwot gymnastics team after completing the final rotation of the team competition round at the state gymnastics championships on Nov. 2.

The Niwot gymnastics team claimed the school’s second state crown in less than a week with a stirring win at the 2018 Class 4A championship meet, held Nov. 2 at Thornton High School.

Led by senior captain Lindsay Chohon and newcomer Hattie Katechis, the Cougars scored 181.500 team points to win this year’s title, the sixth in the program’s history.

“I’m at a loss for words,” head coach Marisa Purcell said after winning the championship, her second as head coach. “I’m proud of them for coming together as a team and competing and working so hard.”

Cougar gymnasts claimed two of the top three spots in this year’s all-around competition, and placed a total of three in the top ten. Chohon capped off her remarkable high school career by finishing runner-up for the second straight year, thanks to top-three finishes in the floor (9.450) and vault (9.300) events, and a pair of sixth-place scores in balance beam (9.200) and uneven bars (9.050). In her four years with the program, Chohon finished in the top-ten all-around at state four times, earning All-State honors in 2017. She was also a member of the Cougars’ 2015 state championship team as a freshman.

“I knew I was going to come in here with my team and be as confident as I could and hype them all up and go home a champion no matter what happened,” Chohon said of her mentality heading into her final high school competition. “It was awesome being in this atmosphere for one last time. It’s a great way to end it.”

According to Purcell, the team’s off-season skill-building regimen was a significant factor in their success at this year’s championships, as was a fortuitous draw in the rotation schedule at the meet itself.

Starting on floor “started the night off great,” she said. Four Niwot gymnasts finished in the top five for the event, including sophomore Grace Stephenson, who took first overall with 9.500 points. “It’s what they enjoy doing and they were pumped for it. They performed marvelously.” 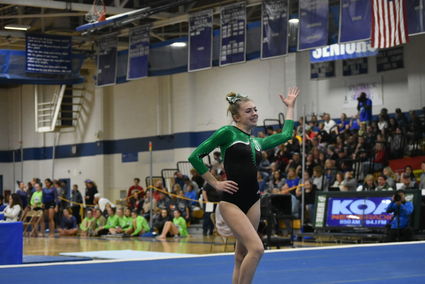 Senior and captain Lindsay Chohon during her floor routine at the Class 4A state championships at Thornton High on Nov. 2. She finished second in the event, behind with 9.450 points, behind teammate Grace Stephenson, who had 9.500.

That momentum carried them through the next three events, which all saw Niwot gymnasts place in the top ranks. On the balance beam, four Cougars finished in the top ten, including freshman Mia Curry in eighth (9.150). The newcomer also finished fourth (9.150) in bars and fifth in floor (9.375) for Niwot. Elsewhere, freshman Olivia Stroka competed in three events for Niwot and finished 12th in floor. Junior Amber Nusser finished 27th in vault, and Mallory Christopher was 26th in vault and 28th in bars.

“They came in and did their job, and I couldn’t ask for anything more,” Purcell said. “They were phenomenal.”