Niwot calls it a season after playoff loss to Skyview 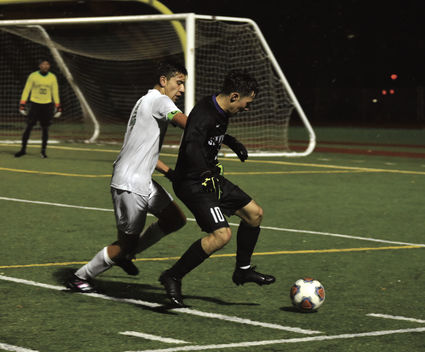 Senior Manny Tapia battles with a Skyview player for possession of the ball in Niwot’s second round playoff game on Oct. 30.

If cold drizzle wasn’t enough to dampen the spirits of Niwot soccer fans who traveled to see their team’s playoff match against No. 2 seed Skyview on Oct. 30, then the final 15 minutes of the second half surely was. Up 2-1 heading into the home stretch, the defense allowed two late goals and the upset victory that seemed within reach of the No. 18 seed Cougars suddenly slipped away.

“I can’t say that we necessarily outplayed them,” head coach Steve Dimit said after the emotional 3-2 loss, their second to the Wolverines this season. “But we definitely matched them this time. The effort was a whole lot better than the first time we were here. The guys left it all out there.”

When these two squads met under sunny skies back in August, the as-yet-untested Niwot defense fell victim to a quick Wolverines’ attack, leading to a 1-0 defeat, their first of the season. In the more than two months since, Skyview won 14 consecutive matches, including a dramatic 3-2 comeback win over Mullen on Oct. 24, while the Cougars went 7-6 in a season plagued by inconsistency.

Dimit and the Cougars came into the Halloween Eve rematch determined to neutralize Skyview’s potent offense, which averaged more than four goals per game in 2018. They also hoped to see some signs of life from their own scoring attack, which was at times on hiatus during the latter part of Niwot’s regular season.

This time, it was the Cougars with the early pressure. Senior Chuy Gonzales finally broke through for Niwot in the 13th minute with his third goal of the year, followed less than five minutes later by senior forward Manny Tapia, who netted his team-leading 16th goal to give the Cougars took a surprising 2-0 lead. 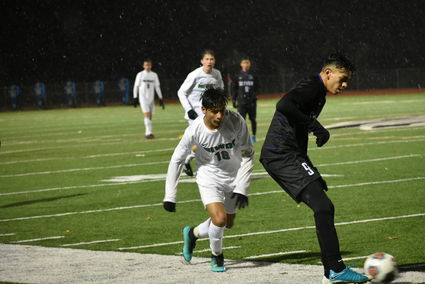 Niwot calls it a season after playoff loss to Skyview

Unfortunately, that was all the scoring Niwot was able to muster. Skyview got on the board late in the first half on a penalty shot, making it 2-1 heading into the break. Niwot held its lead for most of the second half, but a shot by Skyview’s Bryan Vazquez was deflected just past senior keeper Mario Munoz to tie the game 2-2 with less than 15 minutes left. A few minutes later, another deflected shot got past Munoz, after the Cougars failed to clear a corner kick.

The Niwot offense did generate some chances as time ticked down, but the Cougars weren’t able to finish. Skyview held on for the win and Niwot’s season once again ended a few games too early.

“I told the guys I’m just proud of them,” Dimit said. “They worked really hard to get here, and things didn’t go our way. It wasn’t for lack of effort.”