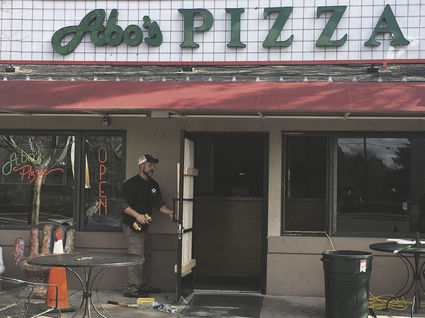 A repairman at Abo’s Pizza assesses the damage done by thieves who targeted it and three other Cottonwood Square businesses in “smash-and-grab” burglaries during the overnight hours of Oct. 30.

Two Boulder law enforcement agencies are investigating a string of “smash-and-grab” burglaries that occurred at seven area businesses in the overnight hours of Tuesday, Oct. 30, and at least one more on the night of Nov. 5.

Three businesses in the Cottonwood Square shopping center (7960 Niwot Road) in Niwot and four businesses in Gunbarrel’s King Soopers shopping center (6565 Gunpark Drive) suffered damage to glass windows or doors, and an unspecified amount of money and property was also stolen in the Oct. 30 incidents. An empty cash register was stolen from Old Oak Coffee House in Old Town Niwot after a break-in Nov. 5.

Tom Smathers, owner of Abo’s Pizza in Niwot where the front door was smashed, said nothing was taken from his establishment. Neighbors Winot Coffee and Raza Fresa Mexican restaurant weren’t so lucky. Smathers was also annoyed that the would-be thief or thieves resorted to other means after the theft-deterrent bars on his front glass door thwarted them.

“I hope they catch that skinny mofo,” he said, referring to the narrow front window that was shattered. 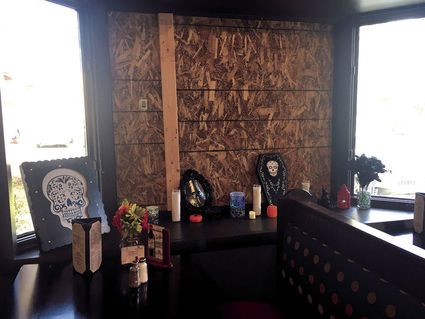 At Raza Fresh Grill, Day of the Dead decorations adorned the sill of the window that was damaged during a spree of smash-and-grab burglaries in Niwot and Gunbarrel during the overnight hours of Oct. 30.

The Winot coffee shop sustained damage to one of its two front doors, and was closed on Wednesday in the aftermath. The front window of Niwot’s Mexican restaurant was also destroyed, but it was open as normal by midday Wednesday, with a board in place of the glass and a decorative display for the upcoming Day of the Dead on the window sill.

The Boulder County Sheriff’s Office is heading the investigation in Niwot, while the Boulder Police have jurisdiction in Gunbarrel. The agencies consider the incidents related, according to Sheriff’s spokesperson Carrie Haverfield. They are also consulting with law enforcement agencies across the Denver metropolitan area, which has seen a rash similar crimes in recent weeks.