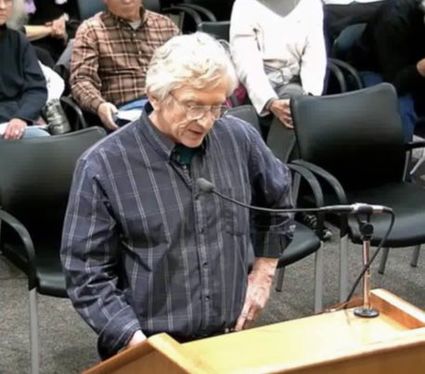 Third Avenue resident Jim Kalinski was one of many public speakers to come before the Boulder County Commissioners at a hearing regarding the building moratorium in Old Town Niwot.

More than two dozen people stepped up to the microphone in the Boulder County Commissioners’ hearing room on Oct. 30 regarding a temporary halt of development in downtown Niwot. The commissioners could vote to maintain, modify or rescind the moratorium they initially approved on Sept. 20.

Dale Case, Boulder County Land Use Director said his department’s recommendation was to uphold the six-month moratorium on development in the Niwot Rural Community District (NRCD), but with the exclusion of the historic portion of the district. The historic area is defined as 2nd Avenue between Murray Street and Franklin Street with the addition of one lot on the corner of Franklin Street and 2nd Avenue, the site of Colterra Restaurant.

The county has stated the moratorium was needed in order to revise existing building regulations it believes give inadequate guidance on building density and use, as well as poor direction on how to regulate the use of the alley separating the mostly commercial area on 2nd Avenue from the residential area on 3rd Avenue. The county’s rationale for recommending only the non-historic area remain under the moratorium was that it is “subject to less review and also has a greater potential for change which poses the greatest risk of altering community character.”

Case also said there’s been a “shortcoming” in how neighbors have been involved with development in areas adjacent to their homes. As a result, he stated new regulations would likely engage residents sooner in the process.

Speakers repeatedly expressed a sense of urgency to rebuild Colterra Restaurant which has been closed for a year due to a fire. Niwot residents and business owners, out of town patrons, a local meat vendor, and even a competitor, Howard Treppeda of Treppeda’s Ristorante, each explained that the eatery’s absence is a big loss financially because it draws shoppers to Niwot, its suppliers have lost sales, and tax revenue is lost which would help fund local improvements and events.

A sometimes see-sawing commentary took to place with apprehensive Old Town 3rd Avenue residents calling for a continuation of the moratorium and frustrated 2nd Avenue business owners who are ready to move forward with their development plans taking to the podium.

Jim Kalinski spoke of the changes he’s witnessed as a 3rd Avenue resident for the past 41 years, some buildings he dubbed well done and others not. “Please allow the county planning staff time to properly address all of the issues and save our connection to the past,” Kalinski said in his appeal for the moratorium to be upheld.

Developer Anne Postle read an excerpt from the county’s comprehensive plan regarding Niwot sidewalks which “encourages developing a network of pedestrians and bicycle pathways that are protected from vehicle encroachment.” Postle cited the provision in support of 2nd Avenue businesses’ right to use the alley, rather than the Land Use department’s current policy of limiting vehicle access to 2nd Avenue where driveways cross sidewalks.

Postle said she was confident that the land use department had made a decision regarding a proposed setback requirement. “Just tell us,” Postle said. She said residents want a large setback and commercial parties want to maintain the current zero-foot setback, but she felt a decision could be made without a moratorium so that developers can plan accordingly. Postle is proposing a development in the non-historic section of 2nd Avenue.

About ten Old Town residents’ comments expressed the sentiment that the moratorium will result in a much needed thoughtful revision of regulations. Two residents were not in support of the amendment to the moratorium and felt every developer, regardless of which block they are on, should be treated similarly.

Bruce Rabeler, a 2nd Avenue business owner and a 3rd Avenue resident said, “The focus should be on the plan review process which has failed us in the past when the public wasn’t given proper notice.” He stated that setback requirements, access to the alley, and the addition of residential properties are the biggest clarifications that should result from revamping the regulations.

Developer Bob Von Eschen, whose company Von’s Colorado Concept is proposing a mixed-use development in the non-historic district, said his company has been in the application process for over a year, but that Land Use staff turnovers and delays have prevented him from getting his company’s plans approved and now he’s unable to move forward. Tim Coonce, owner of Porchfront Homes in the historic district, said because of a moratorium anywhere in Niwot , his bank will not extend a loan for development of his property.

Treppeda said he was in attendance to support the rebuilding of Colterra and said he is in favor of allowing businesses access via the alley. “I’ve seen a lot of close calls,” he said regarding pedestrians, bikes, and vehicles in front of his business.

Tony Santelli, owner of the Niwot Tavern, former LID board member, and president of the Niwot Business Association said, “Colterra needs to open fast. This is a crisis for Niwot.”

Business owners also noted that the Land Use Department does not allow a developer to simply file an application for Site Plan Review, even without a moratorium, citing a delay of up to three months while waiting for “permission” to file.

After apologizing for the surprising manner in which the moratorium was initially announced, the commissioners unanimously accepted the Land Use Department’s recommendation to uphold the moratorium with the exclusion of the historic area. Speedily completing the code update was encouraged, as well as giving developers already in the queue a place at the front of the line.

“Two or three projects could make a huge difference and could change that neighborhood charm,” Commissioner Deb Gardner said. “Knowing that we don’t really have as restrictive processes and codes on that second block gives me pause that we don’t have in place the regulations we need.”

“Great places may happen by accident, but they don’t stay great by accident. We need to be sure we have that vision,” Commissioner Elise Jones said.

With the amendment to the moratorium, Colterra can move forward with plans to rebuild, according to the county as original plans submitted to the county for rebuilding Colterra have been approved. However, Bradford Heap, owner of Colterra announced that new plans will be submitted which may include a larger building and residential units because “the insurance offer won’t make it financially feasible to reconstruct in its prior form.” In addition, Colterra relies on leasing parking spaces from neighboring properties which continue to be subject to the moratorium. With the uncertainty of possible changes to the NRCD regulations, those parking spaces may not be available to Colterra.

Tim and Mary Coonce of Porchfront Homes have been working on plans to add an addition to their property at 102 Second Avenue, and had been waiting on a response from county planners since June 11, 2018, to get an appointment to file their application. On September 20, 2018, the temporary moratorium went into effect, and they still awaited a response. As a result, they were delayed another 40 days until the moratorium was lifted for the Historic District.

Tim Coonce reported that he emailed planner Denise Grimm shortly after the hearing, once again requesting a date when he could submit his plans. In response, he was given a date of Feb. 4, 2019. When he responded that Commissioner Elise Jones asked the Land Use Department to expedite applications for those property owners affected by the moratorium, he was given a new date of Jan. 2, 2019, when Porchfront will be able to submit its plans.

Case laid out a timeline for the moratorium with completion in March 2019. Jones asked if there was a possibility of doing it more quickly. “I’d be hesitant to say that we could do this much faster,” Case said.

Gardner asked if the few projects already planned could make some progress during the moratorium. Case said it was possible to do some preliminary planning, but “it would be at their risk.”

Following the commissioners’ decision, 3rd Avenue resident Victoria Keen said, “I think the moratorium decision reflects the best possible outcome. Colterra will be excluded and will be able to proceed with their plans.”

“I was floored by the outcome, Von Eschen said, “The part that really is disturbing is the short-sightedness of the decision.” Von Eschen said his expectations are that regulation revisions will increase setbacks and restrict use of the alley. “If they downzone the area we can develop, then we lose green space and walkways. The one thing we realize is that we have to separate pedestrian traffic in order for them to be safe.”

“The continuation of the moratorium is very disappointing,” Postle said. “I don't think the land use staff or the commissioners understand the harm they are doing to our local small businesses. This moratorium is a dark cloud over all of our businesses.”