Mila's miracle brings hope for others with genetic diseases 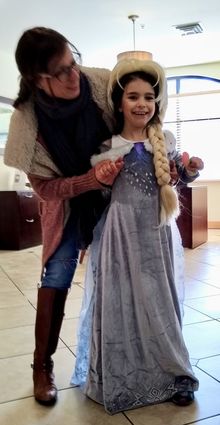 Julia Vitarello posed with her daughter, Mila, who dressed as her favorite character Elsa from Frozen to celebrate Halloween.

Shortly before her family went to Boston early this year for Mila Makovec’s experimental treatment of Batten Disease, Mila’s symptoms worsened to the point that her mother, Julia Vitarello, thought she might be losing her daughter to the fatal genetic disease. The quantity and severity of seizures Mila was having skyrocketed to 30 times a day for two minutes at a time. Seven-year old Mila slumped forward most of the time, was losing her ability to hold herself up when standing and walking, and was choking on her pureed food so frequently that she was put on supplemental nutrition through a feeding tube.

The family has been back in Colorado since June and Mila's seizures have lessened in severity and decreased to five to 12 per day, each lasting only a few seconds. Mila stands straight again, with much less support. She holds her head up and is more alert, her mother said. Her swallowing has improved and she’s back to eating pureed food without choking.

“It feels pretty unreal,” Vitarello said. “The fact that there’s good reason to believe that this treatment has actually stopped her disease and has allowed her some improvements…that may seem small to some people given how much she’s lost, but it feels huge to me.”

“In the last week, she’s been unbelievably alert, happy, smiling, wide-eyed, and listening to everything we’re saying. She’s been walking up the stairs with support, but alternating her feet all the way to the top,” Vitarello said.

Batten Disease is diabolical; it slinks in around age three and usurps a child’s development by killing neurons and causing the brain to atrophy, eventually shrinking it down to nothing. Sufferers revert to infancy and become unable to walk. The parts of the brain that support speech and sight gradually deteriorate. Children with Mila's type of Batten often die by age 12.

Through a Facebook post in January 2017, Dr. Timothy Yu, a neurologist and neurogeneticist at Boston Children's Hospital learned that Mila’s family was looking for a way to undergo genome sequencing quickly. One mutation in a Batten-causing gene had been located from Mila’s father, Alek Makovec. But two mutations in that gene were needed to cause the disease, and no lab was able to find the other mutation passed on from her mother. Yu stepped up to help and his lab uncovered the extremely tough-to-find mutation, which was the missing clue. And then unexpectedly, Yu took it one step further and told Mila's parents he might be able to help with a treatment.

Yu knew of a recently approved drug called Spinraza, developed to treat another devastating childhood disease. Spinraza was showing remarkable success. He surmised that if he was able to develop a different version of Spinraza, customized to Mila’s specific gene mutation, it might work effectively to hide the error and change the course of Batten Disease in Mila. In January 2018, Mila began treatment using the new drug, affectionately named milasen.

“It’s kind of like a little Band-Aid to cover up her mutation,” Vitarello said. “One of the reasons this is an ice-breaking treatment is because it’s a fully customized genetic treatment. This idea has been dreamed of for decades, and now Mila and milasen have proven that it can happen and it may work. On top of that, it was realized in less than one year from diagnosis, which is unheard of.”

Beyond the scope of saving her daughter, Vitarello’s goal has been to pave the way to help others with rare diseases. Although it’s early and more work needs to be done, the fact that Mila is showing promising signs is incredibly hopeful.

When asked about the future of diagnosing and curing genetic diseases, Vitarello said, “The future looks brighter by the day. I think there’s a combination of things happening. One of them is that rare diseases are getting a ton of attention because although each rare disease affects only a tiny group of people, if you look at rare diseases as a whole, it’s like cancer. There are 30 million people in the US alone who have a rare disease. And the technology to identify the underlying genetic cause of these diseases is taking off. More families are going to bat for their children; they’re raising money and putting together scientists to come up with treatments. Most are focused on one disease. But some treatments, like Mila's could be slightly modified and cut across hundreds to thousands of diseases.”

Mila has a lot of challenges ahead of her, and being able to communicate well is probably the biggest one, because Mila is blind and nonverbal.

“Once again we’re entering uncharted territory. Rehabilitating a child who had these skills and lost them isn’t something therapists are trained to do,” Vitarello said.

Vitarello described the group effort to support Mila. She has built a team of people who are dedicated to giving Mila the best chance possible. Mila often has a caregiver by her side who works together with her parents and a mobility specialist who has experience using restorative yoga with children with neurological conditions. She rides a horse named China every week, sometimes with a speech therapist walking beside her and engaging her. Mila also works with more traditional physical and occupational therapists. The process is constantly evolving.

Mila goes to Boston every three to four months with her family for a single injection treatment that takes an hour to administer with no overnight hospital stay.

Vitarello said the short-term goal of Mila’s Miracle, a foundation the family started after Mila’s diagnosis, is to treat more children and confirm that this technique is as successful as it seems. But, like any new path in science, it will require raising millions of dollars and the foundation is committed to doing that.

The long-term dream, Vitarello said, would be to have clinics offer customized genetic treatments to children.

"I will keep working hard so Mila and those that follow her will have a brighter future,” Vitarello said.