Getting garden ready for winter 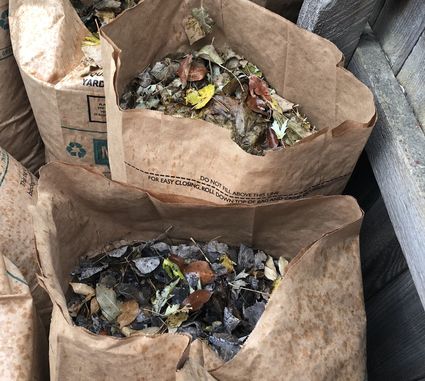 Don’t bag them all! Chopped up leaves make for inexpensive and useful mulch to overwinter your garden.

When the last of the harvest has been pulled from the garden, it’s time to put those beds to, well, bed. Preparing your garden for winter will make for healthier, heartier plants and soil next spring.

If you put in a little extra work now, it will pay off once the weeds usually make their appearance when the weather warms. Believe it or not, weeds don’t wake up in the spring. They start planning garden domination during the quiet winter months, when no one is giving them a second thought.

First, pull out the annuals and leave the perennials. If you begin early enough, you can throw some seeds for cover crops, such as clover or winter wheat, over the garden. This has the double benefit of holding moisture and protecting your soil over the winter, and adding nitrogen and loft to your soil when you till it under in the spring.

However, you don’t have to use cover crops. You can simply get rid of the weeds you see now, then cover the garden with a two to four-inch layer of mulch, such as chopped leaves, prepared mulch, straw, or pine needles. The idea is to keep moisture in, and keep the ground frozen. This is especially important during our sunny Front Range winters, when a warm spell can goad dormant plants into waking up too early. Wait until after the first frost, then cut dead and dying material back—except for sunflowers and coneflowers, because birds in winter can use them for food and shelter—and spread that mulch around.

If you really want to boost those vegetable garden beds that will remain fallow throughout the winter, weed them, spread out a layer of compost, and then mulch. You’ll be preventing erosion and desiccation (drying out) during our predictably unpredictable Colorado winters.

It’s impossible to predict when you’ll need to rake off all that mulch in the spring when it’s time for tilling and planting, because we’ve all been surprised by a snowstorm in April. However, a good rule of thumb is when you start to smell mud, it’s time to remove that winter layer so that the soil can warm up and we can start all over again.