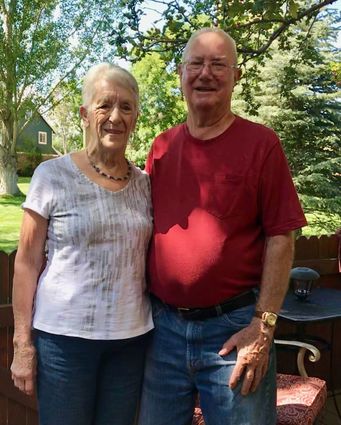 Joyce and Vic Johnson are longtime Niwot residents and familiar faces to many in the community.

A close friend of Joyce and Victor Johnson’s brought them to the attention of the Courier, knowing the couple would be interesting to profile in our Familiar Faces column. They’ve made the most of the area by building strong friendships, strolling around town, and enjoying local restaurants and businesses. Their love for each other and the community are inspirational and heartwarming. Here’s a glimpse into their lives.

Can you give us a little background on yourselves and how you met?

Vic Johnson (VJ) - From the time I was five years old until I was 17, I grew up in New York City. I graduated from high school and went into the Marine Corps in 1945. I stayed in the service for four years and came back for college. But then the Korean War started so I went back into the Marines until I retired in 1967.

I’d been to Colorado in the 1950s. Back then Boulder was a little college town and I liked it so this is where I brought my family. After my [first] wife died, I was looking for someplace to live. I came to Niwot and there was a rental sign on the building next door.

After I moved in, my landlady told her [Joyce] that “a live one had moved in.” So she laid in wait for me at the communal mailbox.

Joyce Johnson (JJ) - I came from Connecticut and had lived in New England for 58 years. I moved here with my [late] husband, because his son lived in Boulder and owned this townhome. We were only going to stay until my husband retired, but he died three years after we got here.

Vic moved next door, we met and married three years later. I ambushed him. I was ready to meet someone, so I thought I’ll watch for him.

What did you do prior to retiring?

VJ - When I went back into the Marines, I requested flight training. I wound up back in Korea flying several different aircrafts all over the world.

I worked for Ball Aerospace in Boulder as a production engineer making one-of-a kind-type of things go round and round in space.

I have six children and most of my children still live around here.

JJ - I had five children when I was very young so I didn’t finish college. But, I went back to college and became a teacher when I was 54. It was an exciting part of my life, because I’d always wanted to do that.

When I came out here, I took care of people’s children in my home. I also worked in a corrections library in Longmont. It covered everything you’d ever want to know about jails and prisons.

VJ - Our neighbor arranged for our paperboy to put the paper between the doors. About six in the morning I go down, get the paper, some coffee and we go back to bed to read the newspaper until eight o’clock.

JJ (laughing) - Sometimes I’m the one who goes down to get the paper…not very often.

VJ – Three days a week we go to the therapy pool at the Longmont Hospital and exercise. The other days of the week, we’re supposed to walk a couple of miles, but now it’s become one mile.

JJ - We used to walk up Niwot Road to downtown and back home on Neva so a lot of people saw us. All of the business people knew us because we’d walk by almost every day. But since Vic turned 90 we don’t go downtown anymore.

VJ - Every year we’ve made trips somewhere around the world. We’ve gone to Europe 23 times and we’ve been to China and Thailand.

JJ – We’ve been to 31 countries. Walking on our trips became hard, so we’re not doing that anymore. But we’ll still travel around the country.

We each volunteer at the Longmont Hospital. I work in day surgery keeping the nurses supplied with whatever they need, changing beds and wiping down rooms. Vic helps people in a surgery waiting room.

I hear you’re very close. How do you Cultivate your relationship?

JJ - We hold hands everywhere we go. People stop us on the street and comment on that, can you believe it? When we’d walk downtown, quite often there was a woman we’d see and she’d say, “Oh, hello you love birds…I love seeing you holding hands!”

We’re very affectionate with each other and he does many kind things for me.

VJ – She decided she’d cooked dinners long enough, so she no longer cooks dinners. I generally make breakfast and frequently, I make lunch.

JJ – And you take me out to dinner!

VJ – How many restaurants did we go out to while we were dating?

JJ – While we were dating, I started keeping track and on our honeymoon in Italy, I realized we’d been to 120 restaurants.

Do you have plans you’re looking forward to?

JJ – We’re thinking of taking a train trip from LA to Seattle. And we’re looking forward to Bronco season when we always have people over to watch the games.

VJ – Everyone likes to come here for Broncos games and drink wine.