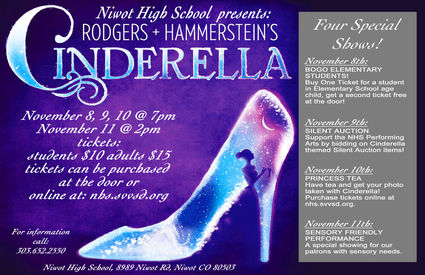 This is a “Big Year” for Niwot High School’s fall theater production. Only once every few years does an NHS production have a live student orchestra accompanying a big name musical. Rodgers and Hammerstein’s “Cinderella” will take to the stage Nov. 8 through 11 starring a cast of nearly 50 actors.

NHS drama teacher and show director Erin Anderson described the production as elaborate and glitzy. The Broadway version, updated in 2013, has songs that will be completely familiar, but the characters we’ve come to know so well are portrayed to a deeper level because they’re more intellectual and have a social conscience.

“It’s still fairytale-land-ish, but for this version, they were trying to go for a modern take, and Cinderella is a little more empowered,” Anderson said. “There’s still all the romance aspect to it though.”

One challenge was the on-stage character transformations. But with the help of rented complicated costumes developed by a professional seamstress, Cinderella and her fairy godmother will change before the audience’s eyes.

NHS productions aren’t allotted a budget, so that makes the process from start to finish a very real-world experience for everyone involved. Ticket and concession sales, along with advertising in the play program will fund the show. With 700 seats to sell for each of 4 performances, the crew is hoping to sell out the house and cover costs. Selecting a beloved musical like Cinderella can help draw in crowds, Anderson said.

Technical director Jason Watkins said. “Because we don’t have a big Broadway budget, we use old school remedies to do our best rendition of Broadway. A big thing for us this year is that we were trying to incorporate recycling a bunch of old stuff. A large part of the show takes place in a forest, so we try to bring the outside inside.” Watkins runs a technical crew of 15 who handle audio, sound effects, lighting, set production, and scene changes. NHS has the only stage technology crew in the school district that earns certification and is paid for their work.

Watkins said that to put on this show costs around $16,000 to $20,000. Buying the rights to the production is $4,800 of that cost. Any funds earned beyond the cost of the show are put into the next production.

When asked what their favorite parts of this production are, Hadjiyiannnis said because this is a “Big Year,” the scenery is really intricate and there’s a lot of movement on the stage. Natanzi said the costumes and music are really beautiful. They both agreed that the crew has worked incredibly hard and is now like a big family.

Choir director Laura Walters works with the cast on their songs and with the orchestra to perform over 25 pieces of music.

“The music is so classic and they’ve added a lot of humor to this version,” Walters said. ”The leads are lovely singers and are able to bring the characters to life.”