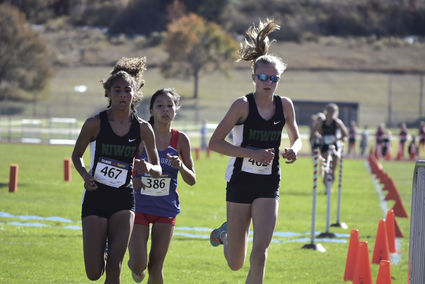 The Niwot girls put an exclamation point on their “amazing” regular season with a dominating win at the Class 4A Region 3 cross-country championships, held at Lyons High School on Oct. 18.

Running in a pack, the Cougars posted four of the race’s five fastest times to claim the team title and qualified to represent Niwot at the Class 4A State Championships in Colorado Springs on Oct. 27.

“We had four girls, and any one of them could have won it,” Niwot head cross-country coach Kelly Christensen said following his team’s first regional win since 2015 and the squad members’ first varsity competition together since September. “The girls worked together the first half and then raced the second half. They shook the rust off, and looked really, really good doing it. ”

Niwot sophomore Taylor James claimed her second consecutive regional title with a winning time of 19 minutes, 14 seconds, two seconds faster than her championship time as a freshman, and three seconds faster than teammate Layla Roebke, who took second overall on the day (19:17).

“It was a great day to remember what it’s really like to feel pain during a race again,” James said following her convincing win. “That was our focus before state.”

Down the stretch, James and Roebke battled with Centaurus senior Molly Maskins (third-place) for the lead, but finally boxed her out of the top two spots. Coming in fourth was Niwot senior Maggie Smith (19:38) in her final high school regional race, followed by junior Joelle McDonald (19:43), who took nearly 50 seconds off her regional race time between 2017 and 2018.

Both Christensen and the Niwot runners were pleased to see the pack-running strategy pay off with the regional crown, and are looking forward to the return of junior Samwrit Dawson. The junior, who has enjoyed breakout status this season, was held out of Thursday’s regional as a precaution, but will add another top-five runner to the powerful Cougar lineup at the next week’s Class 4A championships, where Niwot is considered one of the top contenders for the title, along with Air Academy and Battle Mountain.

“Honestly, I think it’s ourselves and our mindset,” James said when asked about the biggest obstacle between Niwot and this year’s state title. “If we can just get over the pain and run with grit, then we can conquer anything or any team.”

Over in the boys race, Niwot runners also claimed the two top spots, but the Cougars weren’t quite able to hold off the tightly knit Centaurus team, which placed runners in five of the top 10 remaining spots. The Warriors claimed their second straight team title, with 28 points, just three points ahead of Niwot, which had 31. Both qualified to take a team to the Class 4A championships on Oct. 27.

Niwot’s Cruz Culpepper was the fastest boy on the day, coming in at 15:56 to claim his first-ever regional crown. He enters next week’s state meet as a legitimate contender for the individual title. 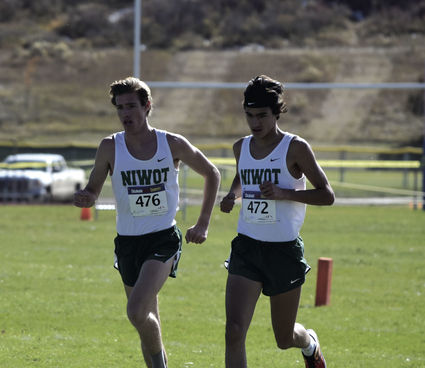 As he has all season, Ares Reading finished closely behind Culpepper, with a time of 16:16, four seconds faster than 2017, when he was also the Region 3 runner-up. Senior Benjamin Bi was fourth overall (16:52), and freshman Zane Bergin turned in an impressive performance, finishing in 17:20, which was good for 10th overall. Niwot also had top-20 finishes from juniors Luke Robinson (17:33), Caleb Bishop (17:51), Jack Kenkel (18:04) and Ethan Jiang (18:18), and from freshman Joey Hendershot (18:22). The Cougars were without senior Jack Volf, who Christensen expects to have back at state.

“We obviously have the tools up front, one-two-three” Christensen said of his team’s prospects at state against the highly disciplined Centaurus squad. “We just have to minimize the point spread between their fifth runner and our fifth. That’s what we’ve been practicing, and today, our freshman only let one guy in between their fifth and him. It will be a coin flip next week between them and us.”