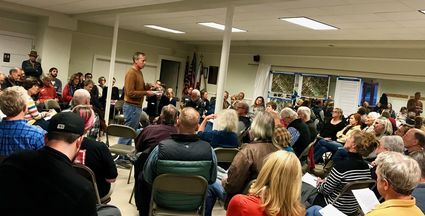 Involved Niwot residents and business owners attended a community meeting at the Left Hand Grange Hall. The meeting was called by the Boulder County Land Use Department to discuss a recently issued moratorium on development in order to revise building codes for the Niwot Rural Community District in Old Town Niwot.

Residents of Niwot showed up in force at the community meeting to both question county officials and for many, to hold their ground regarding what their preferences are for development within the business district of their town.

For the residents on 3rd Avenue, many of whom have lived in Niwot for several decades, two topics were high priorities: the county’s process around the development and the moratorium and secondly, the sanctity of the alley between their homes on 3rd Avenue, and the mostly commercial properties of 2nd Avenue.

Right out of the gate, residents expressed consternation over the lack of communication about the meeting and what the procedure will be in order to stay apprised of happenings and to participate in the process.

“Everyone in this room was totally blindsided. There have been no meetings and suddenly you show up here and it’s like, ‘let’s start talking about this’” one woman said. “What about the people who aren’t here?” one man asked.

“Based on what we get out of this meeting tonight, we’ll assess what other outreach we’ll need,” Boulder County Land Use Director Dale Case said. Case explained there were meeting announcements in newspapers and advised attendees that email addresses were being taken to send out notices. He also mentioned the county’s website has an online comment form set up specifically to allow for input regarding updating the code.

After more than 45 minutes of discussing the process, the focus turned to opinions on the alley - the pivotal point of contention for neighboring residents. The alley is a single-lane path with no through way on the east end.

Responding to questions about who owns the alley and what legalities surround its use, Boulder County Transportation Engineer Mike Thomas said the alley is owned by the county, but the county is not required to maintain it.

Thomas explained there is nothing special about that alley and he read from a letter written in1997 by the then assistant county attorney which stated, “It is likely that the primary historic use of these alleys has been access to the adjacent properties by the owners or their designees and each adjacent property owner is equally vested in the right to use, maintain, and improve the alley in a manner which will not interfere with the other adjacent property owners. “

Thomas added, “At the end of the day, we have to work out how that alley is used, not who owns it.”

Michael Selak, a resident of 3rd Avenue, said, “We don’t want there to be any alley access because commercial [traffic] should come in on 2nd Avenue. “

That was met with disagreement from a few other residents and several business owners who felt that because the area is well-used by pedestrians and cyclists, deliveries made to commercial businesses from the street side leads to blocking traffic and crossing over sidewalks, making for dangerous situations. It was also pointed out that the vast majority of existing businesses already utilize 2nd Avenue for their main access and the new concern is really the proposed additional residential units’ impact on alley usage.

Von’s Colorado Concepts’ proposed mixed-use project at the east end of the alley has especially raised the ire of 3rd Avenue residents because access to the planned residential units is from the alley, and there’s already discontent over the recently completed two-story residential units in the Southpaw Commons project.

Third Avenue resident Victoria Keen, who is married to Selak said, “I’ve lived on the alley for 35 years and it’s been peaceful. That alley has been like a buffer and all of a sudden there will be cars going up and down the alley.” Selak added that the view from their yard is “like the Great Wall of China” now that Southpaw Commons is behind their home.

A 30-year resident of Niwot, who lives near the elementary school in Morton Heights said “Things change. There’s a parking lot across the street from me now. I didn’t like it, but I lived across the street from the school and I knew it could be developed. It’s 2018 people, and we have to go with the flow of development of our town.”

“I get sideways on the use of residences in the downtown area,” said a man who added he’s lived in Old Town area for 30 years.

One resident who advocated for direct conversations between businesses and residents said, “As a community we need to communicate with each other. The more we don’t support each other, the more the county, big brother, will step in and say we need to make more rules.”

Several people said the owners of Left Hand Animal Hospital took an approach they appreciated when they went door-to-door to speak with neighbors before completing plans for their new location on Franklin Street, which required Special Use Review for approval.

A turning point occurred when business owner Anne Postle, developer of Southpaw Commons, apologized for upsetting residents with that project. She said because of neighbors’ concerns about more residences, she’s changed plans three times for a project she’s proposing behind Osmosis Gallery and it will now be all commercial space.

“I care. I want to be a good neighbor,” Postle said.

Keen said, “We thank you for saying that and I think we all really learned something from that. It seemed like there was no attention paid to how it looked from our side of the alley. I would be happy to walk with you and have you meet the neighbors and see how things look from our side.”

Toward the end of the meeting, the tone softened as discussion centered on improving communication between residents and developers.

Bruce Rabeler, who is both a resident of 3rd Avenue and a 2nd Avenue business owner, said, “The good thing that’s happened, is that people are talking and the only way forward is more of that.” He concluded that that transition along the alley is what needs to be worked out.

Case’s summation at the end of the meeting included an acknowledgement that residents had been heard in regards to the alley issue and the need for communication. He said perhaps having “neighborhood meetings” outside of the formal county protocol with developers before proposals are submitted might be a good way to proceed in the future.

For more information and to submit comments visit: http://www.bouldercounty.org/property-and-land/land-use/planning/land-use-code-update/dc-18-0004/