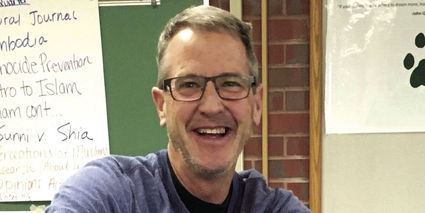 Retired Niwot social studies teacher Douglas Duffy was recently diagnosed with stage IV lung cancer, and now his friends and family are inviting the community to come lend their support. On Friday, Oct. 26, Bootstrap Brewing Company (6778 N. 79th St., Niwot) is hosting Drafts for Duffy to honor the longtime educator and coach as well as raise funds in anticipation of upcoming medical expenses.

“We knew the community would want to support him in a fun way,” Niwot High counselor Leah Messinger said of the upcoming event, which will feature a concert by The Jackson Cloud Band from 4:30-6:30 p.m. “More than anything, it’s a celebration. He’s always been really wonderful at rallying around others in the community and has always been known to help students, staff, and families with fundraising events forever, so we’re going to give that back to him now.”

Duffy got his first teaching position in 1987, and came to Niwot High in 1993. In his 25 years there, he coached basketball as an assistant, served as the head coach for cross-country, and was extensively involved with student council, where Messinger, as a NHS student, first made his acquaintance.

Drafts for Duffy was conceived by his longtime colleague Clark Burton to offset costs related to immunotherapy and radiation treatments, which Duffy began earlier this month. Bootstrap will donate $1 for every beer sold and direct contributions by either check or cash will be accepted. Bootstrap Brewing’s co-owner Leslie Kaczeus said she readily agreed when Messinger and Burton approached her about hosting the benefit, grateful for the opportunity to give back to her son Dylan Kaczeus’s influential basketball coach, who then became a family friend.

“After we opened the brewery, Doug would coordinate teacher happy hours at our place on Fridays so we got to know him more socially sharing beverages at FAC,” Kaczeus said. “He also would come watch the Jackson Cloud Band play at our place as Jackson was a student of his as well.”

According to an announcement at Event Brite, Duffy and his family also welcome gift cards as a “great way to help with meals, groceries, and keeping a positive outlook: Lucky's Market and Pumphouse Brewery are two of Doug's favorites.”

Benefit attendees are also encouraged to show their non-monetary support by bringing “cards, kind notes, jokes, and favorite memories,” in a quest to Fill His Bucket.

“Doug often talked with his students about ‘filling their buckets’,” the announcement continued. “Our goal is to fill up Doug’s buckets with words of encouragement and much needed financial support.”

Messinger said the news of Duffy’s diagnosis came as a shock to the Niwot High community, which is also contending with the news that former choir teacher Kim Watkins is battling breast cancer. Duffy and his family have yet to launch a Go Fund Me account or any other online fundraising effort, but Messinger said those plans are in process. She also anticipates additional fundraising events for Duffy and Watkins later this fall.

“There is definitely a lot going on right now,” Messinger said. “The community is incredible and it always has been. At Niwot, we take care of each other.”