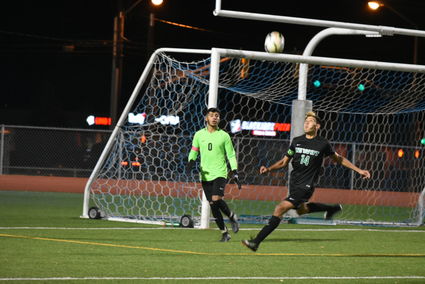 Seniors Mario Munoz and Manny Tapia move to clear a ball from the Niwot goal box in their Oct. 6 match against Silver Creek.

The Niwot boys soccer team closed out an inconsistent regular season with a 2-1 loss to archrival Silver Creek on Oct. 16, but the way they lost was almost as painful as the final score, according to head coach Stephen Dimit.

“We’re struggling,” he said after his team’s second straight defeat. “We’re creating chances to win the game, but we’re not finishing well and that’s been the story of the last week.”

The Cougars certainly had their chances against the Raptors. In both the first and second halves, most of the offensive pressure was in the Silver Creek end, but the Niwot goals that always seemed imminent never materialized. The Cougars’ sole score came on a Manny Tapia penalty kick early in the second period, and not from the efforts of Niwot’s attack.

“I don’t see a whole bunch of technical things that we’re not doing well,” Dimit said. “Really, what we need is a mental reset right now to remember what type team we are.”

Mario Munoz and the Cougars’ defense were solid as they have been all year, allowing just one goal in game play, with less than 10 minutes to go in the first half. The Raptors’ second goal came on a penalty shot after a questionable call in the Niwot box. Munoz had a season-high 16 saves in the game, but recorded his sixth loss of year, all by one goal.

The Cougars ended the season at 8-6-1, and head into the the Class 4A post-season as the 18-seed. For Dimit, Niwot’s struggles down the stretch against lower-ranked conference teams were all the more frustrating after their “perfect” 3-0 win over Centaurus earlier this month, and memorable performances against top - ranked teams Air Academy and Skyview.

“We’re a good team, but we’re about to be a low-ranked team heading into the playoffs,” he said.

Niwot takes on No. 15 Pueblo West in the first round of the Class 4A state tournament on Oct. 24.