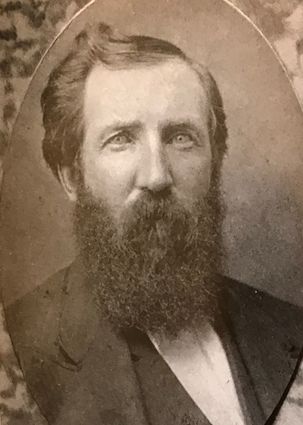 Courtesy photo from Boulder Masonic Lodge collection, BCSO Sesquicentennial History book. Sheriff William A. Corson, 1861-1863 was appointed Sheriff by Territorial Governor Gilpin following the establishment of the Territory of Colorado in 1861 and ratified by the first elections for County offices on December 2, 1861.

Calling themselves “two tired old veterans” with a combined 80-plus years of experience, Dr. William McCaa, a retired captain of the BCSO and Phil West, a retired division chief of the BCSO will present the fascinating legacy of their forefathers in the department and compare those times with the present day department.

Going administration by administration, McCaa and West will sprinkle in intriguing facts, anecdotal stories and historical photographs throughout their lecture.

“I’ve always had an interest in history,” West said. “The genesis of this presentation really stems from the research we did for a sheriff’s office yearbook for our Sesquicentennial year in 2011. We did research on the history of the organization, pretty much just for internal consumption. We’ve added a few things since then too.”

McCaa holds a Ph.D. in electrical engineering. He retired from the BCSO in 2003 where, among other responsibilities, he was in charge of the department’s telecommunications, records, and computing functions. He also assisted in founding and then was the director of the Boulder Regional Communications Center. He later went on to be the administrator and technical lead for the Boulder 911 Authority Board.

West began his career with the BCSO as a cadet in 1973, and after graduating from Colorado College in 1978, he became a deputy sheriff within the county. During his 35-year career, he was a patrol deputy, detective, sergeant, lieutenant and a detective commander. He retired in 2013 when he was the Operations Division Chief.

The Niwot Historical Society’s mission is to preserve, collect, and protect the history of Niwot and the surrounding area. Their most current project is raising funds to restore the historic Niwot Fire House Museum on 2nd Avenue. To join the Niwot Historical Society, which is a 501(c)3 non- profit organization, an individual membership is $15 and families are $25. All donations are tax deductible. For additional information, please visit NiwotHistoricalSociety.org.