Niwot improves to 14-2 with home win over Greeley Central 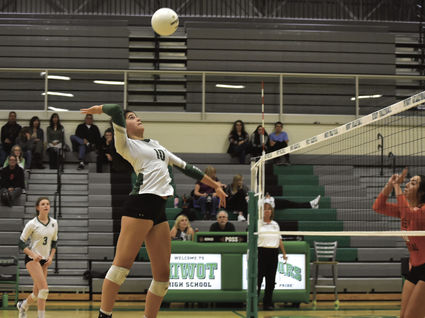 Senior Zoe Gonzales goes up for a kill against Greeley Central on Oct. 11.

Niwot picked up its fifth straight conference win at home over Greeley Central on Oct. 11, thanks to some hard kills by their big middle hitters, Emma Falk and Zoe Gonzales. However, those impressive individual efforts were nearly overshadowed by a lack of discipline down the stretch, prompting concern from Cougar head coach Daisha Agho.

“I’m not really excited about the way we played in the third set,” Agho said. Niwot won the first two handily (25-13, 25-10), but allowed Greeley Central to stick around in the third set before finally putting the Wildcats down 25-23. “I feel like they get comfortable with how the whole set has gone, but then they get loopy in that third set. A lot of that’s on us.”

It’s not hard to see how the Cougars got comfortable. After a slow start in the opener, Niwot went on an 11-0 scoring streak, and then proceeded to dominate the Wildcats over the next set and a half. Seniors Falk and Audrey Richard led the attack, with strong support from setter Madison Schoeder.

“Our team was doing a super good job of communicating, and that makes it a lot easier,” Falk said after her 14-kill performance. “Everyone was working really hard together, and we could all see the other side.”

It was a different story in the third set. Greeley Central made some defensive adjustments and refused to go down without a fight. What seemed like an easy win for Niwot quickly turned into a battle when the Cougars were caught out of position repeatedly. Tied at 23-23, the Cougars finally got two clutch kills from Richard, and put the Wildcats away for good. 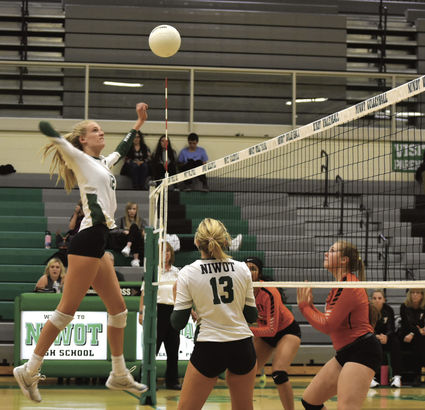 Senior Emma Falk led the Cougars to their fifth straight win, a sweep of Greeley Central on Oct. 11.

“They have the outside and the middle hitter that are phenomenal, and I knew they could put up some balls and put down some balls” Agho said about the unexpectedly close set. “I feel like most of it is stuff that’s controllable on our side. We’ve got to get back in their brains about playing for a full match.”

Falk (14) and Gonzales (9) combined for 23 kills on the night, and also had five blocks apiece. Richard had a season-high 12 kills, while Schoeder and Natasha Terekhova had three apiece. The two also led the team in serving, with a combined six aces.

With the win, Niwot improved to 14-2 on the season, but must still clear some hurdles before the post-season. On Oct. 18, the Cougars will have a chance to redeem themselves against Longmont, which beat them 3-1 on Sept. 25 for their only conference loss this season. The Cougars then face non-conference rival Holy Family, which has gotten the better of Niwot in most of their recent meetings.