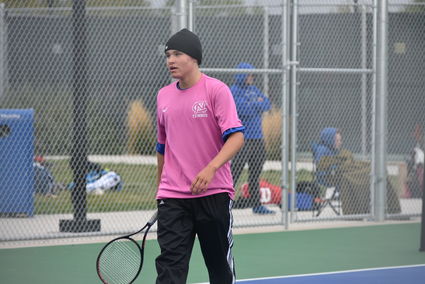 The Niwot boys tennis team capped off their best regular season since 2015 with a dominating performance at the Class 4A Region 5 tournament, held Oct. 3-4 at the Longmont Rec. Center.

Niwot swept all seven championship matches and qualified for a team berth to the state tournament, which opens at Pueblo’s City Park on Oct. 11.

Going to the Class 4A state tournament is nothing new for the Cougars—they’ve finished among the top three teams there in nine of the past ten years—but head coach Miikka Keronen thinks this year’s squad could finally get Niwot to the top spot.

“We’ve been working on some different looks and today we did a great job,” he said. “These teams that think they’ve seen us haven’t seen what we were able to do today.”

The day’s best match belonged to Niwot’s No. 2 singles player Riley Black, who battled back from a 5-2 deficit in the first set to beat Longmont freshman Henry Matheson 7-5, 6-2 and claim his third regional title. Matheson took advantage of some early mistakes by the Cougar senior, who seemed to be feeling some pressure in his final regional tournament.

“In the first couple of games, he was just way more consistent than me,” Black said. “Eventually I got my mental state back. I started making more balls and being more aggressive.”

Black will be making his fourth trip to the Class 4A championships, where he has historically been one of Niwot’s better performers. In 2016, he finished second overall at No. 3 singles, and was third overall last year at No. 2 singles.

“I’m trying not to think too far ahead when it comes to whatever happens in Pueblo,” he said. “I’m super excited and hoping to make the last one a good one.”

At No. 1 singles, Niwot sophomore Neil Wilcox claimed his first regional crown with a 6-0, 6-4 win over Brendon Arndt of Longmont in the finals match. As a freshman, Wilcox was regional runner-up to eventual state champion Brett Finan of Peak-to-Peak, but exited the state tournament earlier than expected with a loss in the quarterfinals. This year, both Wilcox and his coach have a more optimistic outlook for the return trip to Pueblo, especially if the 10th grader can limit his mental errors and tendency to lose focus when frustrated.

“I think I’ll do a lot better this time than I did last time,” the 10th grader said, adding that he’s been especially focused on improving his footwork down the stretch. “If I can get my feet where they need to be, I have total confidence I can hit the ball where it should go.”

Like Wilcox, Niwot’s No. 3 singles player Ben Bicknell was a first-time title winner but will be making a repeat trip to Pueblo. The junior, who transferred from Silver Creek, beat Longmont’s Danny O’Brien 6-1, 6-3. 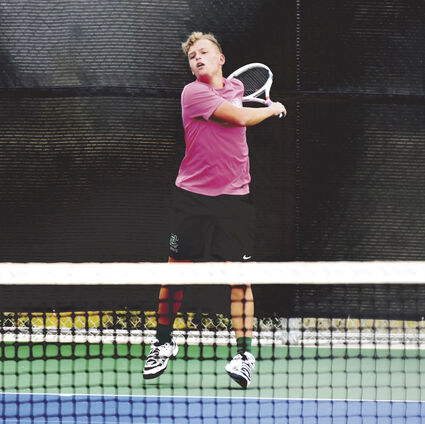 Junior Ben Bicknell, a transfer from Silver Creek, claimed the No. 3 singles regional title on Oct. 4, and will be making his second trip to Pueblo.

In doubles, seniors Riley Mulshine earned both his fourth state tournament berth and regional title with a shutout at No. 2 doubles with partner Anton Lavrouk. Fellow senior Manas Saini is also a four-time qualifier, after claiming the regional win at No. 1 doubles with sophomore Sam Keronen. Seniors Sam Bickham and Jon Lee, at three and four doubles respectively, also earned repeat trips to the championship tournaments, as did their sophomore partners Ivan Calderon and Xavier Moy.

The Cougars closed out the regular season with a 10-1 overall record, with their only loss coming on Sept. 25 at the hands of Colorado Academy, one of the top programs in the state and a perennial contender for the Class 4A title. However, on Sept. 22, Niwot beat out CA for the top spot at the Kent Denver Invite, so these two teams will be looking to settle-up for the season in Pueblo.

“On paper, CA is the best team,” Keronen said. “I feel like we’re the second best, but once you get to the state tournament, you don’t know.”