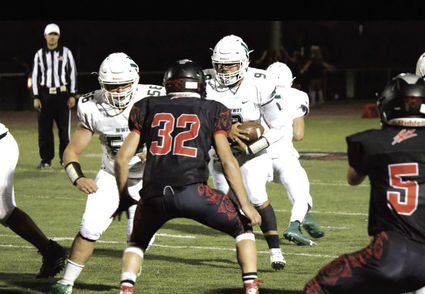 On Friday, Sept. 28, Niwot traveled to Gypsum where the Cougars picked up a 20-14 victory over Eagle Valley, which was celebrating homecoming.

On the ground, Niwot had 36 carries for 160 yards and three touchdowns, one by junior Eric Ruiz, who ended the night with 63 yards rushing. Junior Julian Molina scored the other two TDs, and had a total of 52 yards rushing. Altogether, Niwot runners averaged 4.4 yards per carry, with the longest being 26 yards. The Cougars had 255 yards of total offense.

“The offensive line wanted to make a statement and they did,” said Molina.

The Cougar defense had four interceptions in the win, by seniors DaeMonté Terry, Lucas Steiner, and junior Jarrett Noterman, who ended the night with two. Four turnovers on the defensive side of the ball kept Eagle Valley’s offense out of the end zone, which was a big help in the win. The defense also had 36 solo tackles, another huge contributing factor in the victory.

“It was a well battled game,” Terry said. “Offense and defense was on a roll tonight and that last interception sealed the game.”

Coming home with a win puts Niwot at 3-2 for the season, the Cougars’ best record since 2016. The Cougars are on a three-game winning streak after losing the first two games of the season.