Watkins family asks for help in fight against breast cancer 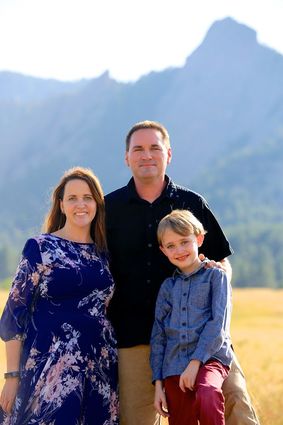 The doctor’s phone call with the diagnosis came an hour before she, husband Jason Watkins, and their eight-year-old son Daniel boarded a flight to Germany to meet Jason’s biological family for the first time.

With the frightening news heavy on their minds, the family spent the next 10 days on “quite the rollercoaster,” Jason said. “It was a wonderful trip and very fulfilling. But we always had questions and concerns about Kim’s diagnosis in the back of our mind.”

Kim said, “We tried to leave it on the backburner while we were there and have fun. His family was amazing, we connected with them really well and had the trip of a lifetime.”

While they were gone, her doctors discussed how to proceed, and when they returned to their home in Longmont, Kim began a 20-week course of chemotherapy.

Now six weeks into that therapy, she said, “It’s difficult, but they have a lot of medications to help you manage. The hair loss is particularly difficult, I think. I’m fatigued, but I’m having trouble sleeping, so that’s hard.”

If she is ill from either a cold or the flu, chemotherapy treatments have to be skipped and will delay the process. Chemotherapy is scheduled to be completed by the end of the year and she’s expected to undergo surgery in February.

“We’re not quite sure if I’ll have a mastectomy or a lumpectomy yet, but they will have to do a lymph node dissection,” Kim said. Following surgery, she will have radiation therapy. They’re hoping the entire course of treatment will be done by April 2019.

Kim is 46 years old, has no family history of breast cancer, experienced no symptoms, and was conscientious about getting mammograms annually. She had thought about skipping this year’s test and realizes now how devastating that could have been given the type of cancer she has.

What she is dealing with is Triple Negative Breast Cancer (TNBC), which according to BreastCancer.org affects only 10 to 20 percent of those with breast cancer and is especially stubborn, because of its lack of response to hormonal treatments and other medications that are usually found to be effective.

Additionally, TNBC tends to spread to other parts of the body more rapidly and recurrences are frequent in the first few years after it’s been identified and treated. Aggressive is the word most frequently associated with TNBC, and her first knowledge of its existence was when it was already in stage 3.

Kim taught choir at Niwot High School (NHS) from 2004 to 2016, where she and her husband first met. Jason has worked at NHS since 1997. He teaches art, photography and runs the technical aspects of NHS theater productions. Kim started teaching at AMS two years ago in order to have more time in the afternoons with their son. The couple has been married for 10 years.

While undergoing treatment, she has taken a medical leave from school so she can focus on her health.

“There’s a lot of reading cancer books, researching, and corresponding with people asking questions or just sending well wishes,” Kim said of about her days. She tries to get out for a walk every day and practices yoga. And of course, there are many doctor’s appointments.

The hardest days for her come three to six days after chemotherapy sessions when the steroids she’s given on treatment days wear off.

The Watkins family has a support team that includes friends, students, and co-workers as well as Kim’s parents who live in Longmont. For more information and support, Watkins has met with breast cancer survivors, including one who is a 10-year survivor of TNBC.

Their most immediate need is for money to help pay for medical bills and to make up for lost wages. A former student of both Kim’s and Jason’s set up a Go Fund Me page a month ago with the goal of raising $40,000. At this time, they’ve raised nearly half that amount.

It’s in the back of their minds, Jason said, whether the time will come when they will have to consider selling their home or vehicles to help pay bills. They said they have wonderful doctors through Kaiser Permanente and are definitely feeling the love and support of the community.

Kim said, “We have an eight-year-old, so we know this is fight time.”

To donate, visit their Go Fund Me page