Student-Athlete of the Week: Trevor Smith 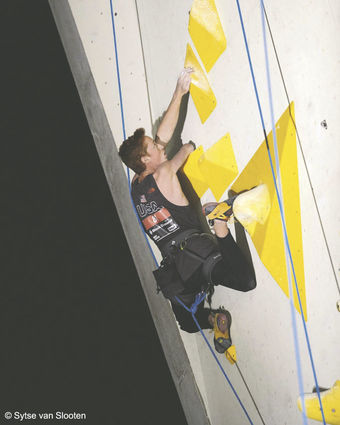 Niwot junior Trevor Smith, who was born without a right hand, participates in the 2018 IFSC Paraclimbing World Championships in Innsbruck, Austria earlier this month.

When Trevor Smith took up rock climbing in 2016, he hardly dreamed he’d be on his sport’s biggest stage just two years later. But that’s just where the Niwot junior found himself on Sept. 14 when he took second place at the 2018 IFSC Paraclimbing World Championships in Innsbruck, Austria.

“It was otherworldly to me,” Smith said of winning the silver medal at the international event. “I’d been training for seven months at that point, and all of the work leading up to that moment all paid off. Immediately, I was overcome with joy, and then after the fact I started wondering how this is going to change about my future. Because this is a big deal.”

As of now, Smith’s future in the competitive paraclimbing world is bright, if still somewhat uncertain. Born without the lower part of his right arm, he took up the sport after watching climbers in Boulder Canyon and deciding to put his tree scaling abilities to the test. He quickly found the sport “addictive” and soon began participating in monthly competitions staged by Paradox Sports, an adaptive climbing organization founded in 2007 and headquartered in Boulder. It was through contacts there that he first learned about the 2018 Adaptive National Championships, and with their urging, he decided to enter the June competition in Columbus, OH, despite the lack of a coach, team, sponsors, or even a consistent workout partner.

“I didn’t really have any idea where to start for training,” he admitted. “So I was doing a lot of stuff solo, some stuff in my garage, and stuff like that.”

He picked up the book The Rockclimbers Training Manual and with its guidance, developed his own plan and spent the next six months preparing for the biggest competition of his still nascent career.

Smith went to Ohio with tempered expectations, but it didn’t take long for the charismatic newcomer to start started attracting the crowd’s attention with an “out of nowhere” performance.

“I was hoping to make it to Worlds, but it was definitely a reach in my mind,” he said. “But, forty-five minutes in, I climbed the third-highest route. For a solid two-thirds of the competition, I was in the top three and sometimes even in first.”

He ended up fourth overall, but third among the Americans, and earned his chance to prove himself among the top climbers in the world.

Prove himself he did, again without the aid of much coaching or formal training. He also had to navigate the logistics of traveling to that part of Europe at the height of Oktoberfest, a challenge that almost derailed his journey before it could begin. But once there, his engaging style once again energized the crowd, and he locked up second place after qualifying and never looked back.

Smith is still sorting through the implications of his breakthrough on the world stage, and is sorting through offers and opportunities. He does have his sights set on next year’s national and world championships in Tokyo, as well as the Paris Paralympics in 2024, so looking for support to get to those competitions is a high priority.

Back at Niwot, Smith is a student in the IB diploma programme, and has made adaptive climbing the focus of his IB CAS project. After graduation, he hopes to study aerospace engineering. He hasn’t committed to any single college, but CU is certainly high on his list, given its solid reputation in his chosen field, as well as its proximity to world-class climbing and the organizations that support it.

In the meantime, Smith hopes to expand opportunities for young climbers. He was one of just a handful of world-bound competitors under the age of 18, and only became eligible for international competition after his 16th birthday earlier this year. So far, that has not proven a disadvantage for the teenager but he wants to see other young climbers get opportunities to compete and succeed.

“What I want to do as a part of giving back to the community is work on adaptive program for the youth,” he said. “For me, it’s become a lifelong sport and such a big part of my life, and I want to spread that kind of energy to other kids who might not have even heard of paraclimbing let alone realized they can do it.”