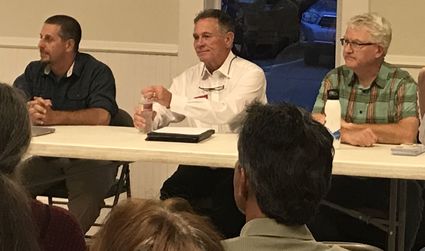 November’s election will determine the next Boulder County Commissioner to serve a four-year term with incumbents Elise Jones and Deb Gardner. Each candidate must live in District 3 (Niwot, Gunbarrel, Louisville, Lafayette, Superior, East Boulder, Erie), but is elected at-large and on each issue, acts on behalf of the entire county.

Running for the office are Gary Cooper (R), Matt Jones (D), and Cliff Willmeng (G), one of whom will replace District 3 Commissioner Cindy Domenico in January 2019. All three candidates were in attendance at the Left Hand Grange where the Niwot Community Association (NCA) hosted approximately 50 attendees for a candidate forum.

NCA President David Limbach moderated the forum and presented questions which were prepared prior to the event with input from the public. Each candidate’s response was timed for equity. There was no discussion directly between candidates. Remarks are edited below for brevity, but retain the core of the candidate’s answer.

Question #1 The City of Boulder’s policy of increasing jobs faster than housing is exacerbating the already bad Boulder rush hour congestion and pollution across Boulder County. What solutions to you have to address this issue and how is it going to be paid?

Cooper – Believes that the county’s business growth is the problem causing the daily influx of workers. He would like to see employers assist with building outlying parking lots serviced by RTD during high traffic times.

Jones - Supports Proposition 110 and would like to apply pressure to RTD to make the Northwest Rail service a higher priority.

Willmeng – He said the county has a political problem when it comes to getting rail up and running, not an economic one. He would like the county to open a public bank for tax dollars rather than handing money off to the Wall Street banks.

Question #2 The Boulder County Commissioners imposed a policy change in the 1990s to stop repaving subdivision roads that had been deeded to the county. We now find the neighborhood roads are extremely deteriorated. How would you propose to get these roads repaved and maintained in perpetuity?

Cooper – Said he was baffled about how the county could renege on their promise to maintain roads. He would like the secretary of state and attorney general to look into whether this was a valid action. He would be willing to help citizens sue the county.

Jones – Acknowledged there are a lot of people upset about this issue and said he believes, although there have been unsuccessful attempts to resolve it, that being resourceful and with all parties working together, there is a way to agree on a solution.

Willmeng – Believes that county is adequately funded to resolve this problem, but it’s a political decision not to follow through. He also contends that the county government is not being responsive to its members, nor are the three members of the county commissioner’s board reflecting the values of the community.

Question #3 Currently, Boulder County Commissioner candidates are required to live within the district that they represent, yet they are elected by the public at large. Unincorporated county citizens feel disenfranchised and that Boulder City and city centers drive policy. If you agree: What would you do to create direct elections in specific districts rather than at-large? If you disagree: Explain how rural and demographic groups are being properly represented?

Cooper – He believes that there should be five commissioners, one for each district. Those commissioners, he stated, should vote on behalf of their district to give voice to each area. He would like to create another petition for five commissioners because the first petition he sponsored fell short of the needed number of signatures earlier this year.

Jones – He said he sees both sides of the issue and he’s thinking it through himself. He said he is an “east county guy” and would listen and do what he needed to do to represent them even if it made people angry.

Willmeng – He feels communities of people are disenfranchised because the 1 percent has made policies that take votes and therefore power from the people and does not address each area’s specific concerns. He is in favor of five commissioners, but would like to “rewrite county government” so communities vote on the issues themselves rather than leaving the decisions in the hands of the commissioners.

Homeowners in rural Boulder County often complain that they do not have control to moderately improve their property and are subject to more regulation than city residents. Square footage limitations, neighborhood “character,” and SMART regulation are used to deny building permits. Do you feel that current codes are too restrictive and if so, what would you do to mitigate this situation?

Cooper – He stated that the county commissioners are doing everything they can to drive people out of the mountains with their codes. He mentioned several examples he is aware of, especially when it comes to the practice of melding deeds. He feels there are rules without merit and they should be made more rational for those people living in unincorporated areas.

Jones – He is willing to look at the rules when there are real problems. Farmer’s concerns especially, should be addressed, because he believes it’s hard enough for them to make a living. He also stated that the county’s staff should be increased so that permits are processed more timely.

Willmeng – He specified that there are many instances in the county where houses are beyond the size that code allows and therefore, within the county, wealth is buying property and law. Big agriculture is able to do things such as using Roundup, but regenerative agriculture farmers are not allowed to build small housing residences for workers. He considers the codes to be too restrictive and superficial. He would like to open up what is allowable to better reflect the values of the county.

From the insights that you have gained in your experience win Boulder County, what would be your top three budget priorities to address what you see as the county’s greatest needs?

Cooper – 1.) Protect the capital assets of the county – examples he referenced are roads and jails. 2.) Address farmland concerns so that restrictions are less obstructive and don’t impact the economy of the industry. 3.) Property rights need to be protected. Oil and gas rights are owned by someone and if people don’t want fracking, they should pay for the oil and gas.

Jones – 1) Fight fracking and focus on sustainability for clean energy. 2.) Solve transportation and congestion problems with a plan for future. 3.) Address flood recovery reimbursement issues. He would like to lobby the state to get FEMA funds that are taking so long.

Willmeng – 1.) Set up a public bank for the county because the county budget is being squandered. 2.) Fracking safety concerns need to be addressed. 3.) Allocate money to public transportation.

The upcoming election has a statewide ballot issue to regulate setbacks. Regardless of the outcome, what additional provisions do you feel can be implemented to further reduce the potential for drilling and fracking in Boulder County near populated areas?

Cooper – He stated there is absolutely no indication that oil and gas drilling causes harmful effects on the population and stated its dangers are minimal. He said Proposition 112 will destroy Colorado’s economy and that the industry makes our life better and our country self-sufficient.

Jones – He said we should all fight fracking every place we can, including voting for Proposition 112. He stated there are more clean energy jobs than oil and gas jobs. We should not believe what the oil and gas industry touts as facts. Health issues are well documented and should be cautionary tales. Fracking lowers the value of nearby homes.

Willmeng – He said Proposition 112, while well intentioned, can be repealed too easily. Based on scientific studies, he believes a half a mile setback is not enough to protect the health of those nearby.