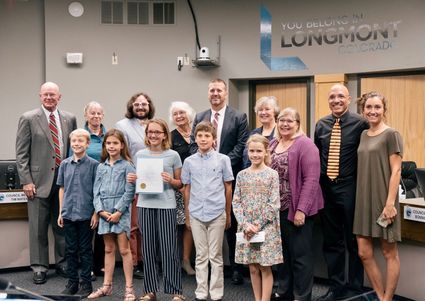 The proclamation reads: Whereas, the citizens of Longmont recognize that cross-cultural awareness and service learning enrich and strengthen a community; and whereas, the Mwebaza Foundation has been actively involving members of the Longmont community to make positive change in the world for 10 years and; whereas, the Mwebaza Foundation has facilitated this opportunity to St. Vrain school children to become global thinkers; and whereas, by partnering with Mwebaza Foundation, Eagle Crest Elementary, Niwot Elementary, Sunset Middle School, Niwot High School, and the Career Development Center, are or will be, responsible for tangible improvements at African schools, including classroom buildings, clean water, and basic sanitation, now therefore, I, Brian J. Bagley, Mayor by virtue of authority vested in me and the City Council of the City of Longmont, do hereby proclaim, September 11, 2018 as “Mwebaza Day” in Longmont and do hereby invite all citizens in the community to celebrate the importance of cross-cultural awareness on this day and every day moving forward.

Peterson accepted the proclamation on behalf of the foundation and explained its beginnings. What started as a pen pal project, evolved into a relationship between local students and the students they were writing back and forth to in Uganda. Exchanged words became shared photographs which the Niwot children took home to show their parents.

He said, “The next day, I was greeted by children and parents who were bothered by the poverty that they saw in the photos, and wanted to help improve conditions at the school. I sat down with my students and said, ‘So you say you want to help? What should we do?’”

Actions followed words resulting in the foundation being highly successful in raising funds and engaging local students, beginning in elementary school and continuing even into their college years.

Peaches McKee, a fourth grader at Eagle Crest Elementary was one of several students who spoke at the proclamation. “I’m so glad to be a part of adding to a beautiful story that matters,“ she said. “I have learned about other cultures and shared their stories with my peers. We have Skyped with our sister school and write pen pal letters every semester to build a friendship. If I can help make someone’s life more beautiful then I will. I can and I will. I’m nine and I want to change the world.”

Sixth grader Noah Bassof said, "My school’s partnership with the Mwebaza Foundation has helped me realize that many people around the world are in need of food, clothes, and a roof above their head. Even if we’re across the world from each other, we can learn from one another while helping each other through hardship."

Devaki Douillard, executive manager of Mwebaza Foundation, said after the ceremony, several attendees expressed feeling so moved by what the organization is doing that they donated to the foundation.

To find out more about what Mwebaza is doing and how to help, visit – www.Mwebaza.org