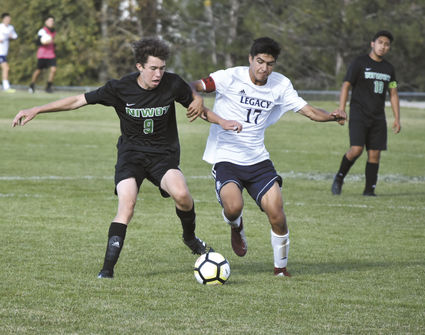 Junior Jared Osteen battles a Legacy defender for the ball in Niwot’s 3-2 overtime loss on Sept. 6.

Niwot’s short-handed back line surrendered just one goal to Air Academy’s attack on Sept. 8, but sometimes it takes more than a strong defense to keep the ball out of the back of the net.

A pair of miscues in their own penalty box doomed the Cougars in an otherwise impressive performance against the defending Class 4A state champions, proving that even minor mistakes against top programs can be costly, according to head coach Stephen Dimit.

“We had a couple of unfortunate misplays of the ball,” he said after the 3-2 home loss. Air Academy scored on a penalty kick in the first half, then benefited from a Cougars’ own-goal in the second. “You can’t ask guys to do anything different from what they did.”

Aside from the two lapses, Niwot matched up well against the technically proficient Kadets, who have lost just once this season. Possession was about even in the first half, and the Niwot forwards generated plenty of chances, but Air Academy held a 1-0 lead at halftime.

The Cougars made their move coming out of the break. In the 46th minute, freshman Azael Marrufo finally put Niwot on the board with his first career goal, tying the game at 1-1. The forward swung up from the junior varsity to bolster the offense in the absence of Aidan Martin, who is out indefinitely with an injury. Junior defender Andy Worrell was also a late addition to the varsity roster, in for Manny Soto, who is also out of the lineup.

“I thought both played an incredible game today,” Dimit said. “We’ve been waiting for them to develop and come out of their shell a little bit. They’ve earned another look.”

Less than a minute after Marrufo’s score, seniors Jonathan Jimenez-Flores and Manny Tapia combined to put the Cougars up 2-1. The two now have four goals apiece, and a combined 25 total points.

Unfortunately, the Cougars could not hold onto their lead. In the 59th minute, a Niwot defender mishandled a pass back to keeper Mario Muñoz, putting the ball in the net, and tying the game at 2-2. Ten minutes later, the Kadets were finally able to penetrate Niwot’s defense to score the game-winner.

Despite the loss, it was hard to find much to criticize in Niwot’s performance, particularly on defense.

“Today I thought we played really well because we were talking,” junior defender Emrick Wells said, echoing a point Dimit also made about the back line. “We’ve been struggling with communicating, and today we just really stepped it up. Also, we were much tighter,…thinking as one defense, rather than four individual players.” 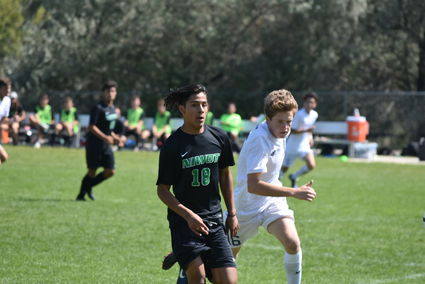 Freshman Azael Marrufo waits for a pass during Niwot’s game against Air Academy on Sept. 8. The forward, who swung up from JV, scored his first career goal in the second half.

The narrow loss capped off a tough stretch for the Cougars, who went 1-3 in their last four games to fall to 2-3-1 on the season. On Sept. 6, the Cougars fell 3-2 in overtime to Legacy, which is currently ranked seventh overall in Class 5A. This followed a 3-1 win over cross-town rival Skyline on Sept. 4 and a 1-0 upset loss at the hands of upstart Skyview, which is undefeated in 2018 and ranked eighth in the CHSAA Class 4A weekly poll.

“We might be one of the better teams in the state with a losing record right now,” Dimit said. “The last three teams we’ve played have been real contenders. We’d like to get one of these teams, Legacy or Air Academy, but we’re a better team than we were at the beginning of the week.”

The Cougars kick off conference play against Mountain View at home on Sept. 13, then face Littleton on Sept. 18.