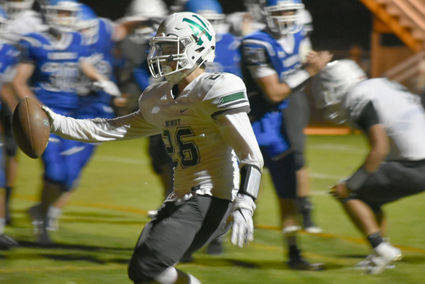 Junior Liam Flanagan scores his second touchdown in the Cougars 26-13 win over Fort Lupton on Sep. 7.

“I’m just really happy for our kids,” Lanter said after his first career victory as a head coach. “We made mistakes, and they overcame adversity, which is what they do best. They’re such good kids, and I’m really happy that they got to experience this. They’ve been working for it very hard.”

Flanagan rushed for three touchdowns against the Bluedevils, the most for any Niwot player in a single game since Sep. 16, 2016, when Jeremy Hollingsworth scored three times in that long ago 40-28 win over Air Academy.

“It means more than just a win,” Flanagan said. “I can’t even explain it. We’ve been working so hard all summer, all year. It’s just so amazing. It hasn’t sunk in yet.”

Flanagan’s first touchdown of the year came on a short run with time running out in the first half. He ran in two more from short yardage in the second half, the last on fourth and four with just under four minutes remaining.

He ended the night with 154 yards rushing on 43 carries, the highest total for a Niwot rusher since 2015.

“It was all the linemen,” Flanagan said. “They’re my brothers and they helped me open up holes and helped me to succeed.”

Sophomore quarterback Ayden Bartko had 93 yards on the night, split between receivers Julian Bell (53), and Jonathan Colon (40), who is back with the team after an injury. His biggest catch of the night came during their first offensive series, giving the Niwot offense an early confidence boost.

Senior kick Josh Palomares also put some points on the board, with a long field goal in second quarter, as well as the PATs on all three Niwot touchdowns.

The Niwot defense also put up some points, when they tackled the Fort Lupton punter in the end zone for a safety late in the first quarter. Overall, it was a solid night for the defensive line, which effectively neutralized the Bluedevils’ ground game. They also pressured the quarterback several times, and recorded a sack.

Senior linebacker Corey Rathburn had another five solo tackles, while junior Eric Ruiz had four tackles and recovered a fumble.

However, the Cougars still proved vulnerable to deep plays, which Ft. Lupton exploited twice for touchdowns, including on their first offensive series.

“Our defense played so well,” Lanter said. “They were lights out. We did give up some big touchdowns, but to their credit, they had a couple of kids that were really, really special at quarterback, that threw the ball really well.”

Elsewhere, senior DaeMontae Terry was again impressive on kick return duty, with 116 total yards combined on the night. He now has 209 return yards for the season.

Niwot continued to struggle with penalties, including a costly block in the back call that brought back a long gain in the third quarter. The repeated procedural calls were also disruptive to the offensive game plan at times. 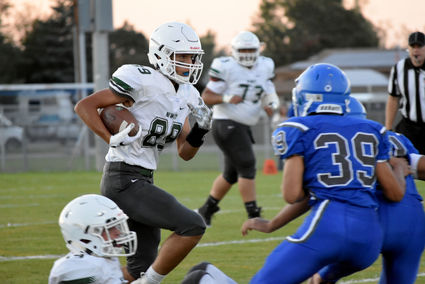 Jonathan Colon with a key reception in the first quarter Niwot’s 26-13 win over Fort Lupton on Sep. 7. The senior wasback with the Cougars after suffering an injury in the season opener against George Washington on Aug. 24.

“We were slow getting off the ball tonight,” Lanter said. “That created some issues for us, so we ended up in some first-and-fifteens and off schedule from where we wanted to be. We’ll continue to focus on that and trying to clean some of those little pieces. It’s amazing what our kids don’t know about football.”

According to Lanter, the Cougars’ convincing win will do a lot to cure that inexperience.

“We have 25 kids that have never played football before this year, so they don’t know what winning feels like,” he said. “We’re hoping that that excitement keeps them hungry at it and that they know there’s no curse that’s over them and that their hard work will result in their being successful.”