Jazz on 2nd, now on its 8th noted year 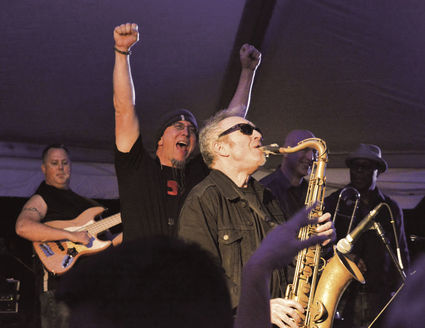 Jeff Coffin and Mars Williams perform at Jazz on 2nd Ave, two years ago. They met six years ago at the festival and will be reunited for this year’s performance.

World-class jazz will be wafting through Niwot, Sept. 15 and 16. The once secret-ish festival, Jazz on 2nd Ave, will be staging its eighth event with high caliber entertainers letting loose in Niwot’s unique small town outdoor venue.

This year’s musical line-up welcomes back Liquid Soul and Jeff Coffin as festival headliners along with several groups new to the scene.

The first day’s five acts begin with Niwot High School’s (NHS) jazz band which will have worked with Mars Williams of Liquid Soul and Jeff Coffin to fine-tune its pieces during pre-concert sessions at the high school on Thursday and Friday. Gleaning the expertise of Williams, who is also a member of the Psychedelic Furs, and Coffin, who now tours with the Dave Matthews Band, is a huge honor for the students.

Festival founder Howard Treppeda said when he told NHS Band Director Wade Hendricks that the famous musicians were coming two days before the event  to rehearse with the students, his response was, “Are you kidding me, Mars Williams and Jeff Coffin…in the band room?”

The festival provides music for the soul and for the body, there will a variety of ethnic culinary offerings. Foodies can belly up for an outdoor oyster bar hosted by Treppeda’s Ristorante, and food trucks such as Steuben’s Food Service, Cocktail Caravan, The French Twist, The Ginger Pig, Los Dos Bros Tacos, Whole Sol Blend Bar, and Avery Brewing.

“I’m hoping for a good turnout and I’m hoping for good weather,” Treppeda said. “One thing that I like about this year’s line-up is that we have some young artists who have great followings.”

Jazz duo Jennifer Hartswick and Nick Cassarino will be the middle act and will feature Hartswick’s lively trumpeting and vocal skills along with Cassarino’s vocals and guitar talents. Hartswick is one of the original members of the Trey Anastasio Band and has performed with many renowned bands such as Phish, Aaron Neville and Herbie Hancock.

Bandleader Chieli Minucci and his group Special EFX will be joined by special guest Nelson Rangell. The Grammy-nominated jazz-fusion band Special EFX has 35 years of experience bringing their original music to world-wide audiences. Minucci won three Emmy awards for his musical compositions for television and film. Colorado-born saxophonist Rangell has been an acclaimed recording artist and versatile jazz performer since the 1980’s and has played on the 2nd Ave stage several times.

Topping off the day’s performances will be Liquid Soul, fusing their blend of funky jazz and urban dance music with the talents of Grammy-winning saxophonist Coffin.  With horns leading the way, the full-on fun and high energy entertainers will no doubt once again bring the crowd to its feet for their crescendo performance Saturday night.

A highly anticipated second day of tunes and tastes has been added to this year’s event when Second Avenue will come alive with the exuberance of gospel music. Uplifting music will mix with the aroma of coffee and breakfast fare. The experience may be further enhanced with Bloody Marys and Mimosas.

“We’re really in for a surprise,” Treppeda said about the morning’s performance. Ty Morris and the Hearts of Worship will be filling souls in Niwot’s vintage atmosphere. The nine-piece band, including a Hammond B3 organ, is based in Denver and tours across the country.  Their music has been described as an inspirational blend of traditional gospel, R&B, funk, and hip-hop.

“The artists stay within the footprint of the festival at the Niwot inn,” Treppeda said. “They don’t just show up at the backstage and leave that way. They walk amongst the crowd and that’s what separates us from the other festivals. It’s a really boutique festival. And it’s a fact that music brings community together.”

Profits from the festival help to fund the Colorado Jazz Group, a 501(c)3 non-profit group which now partners with the Vail Jazz Goes to School organization to bring free musical education to more than 1000 Front Range fourth and fifth-graders during their music classes.

This year the group will visit four schools (Niwot Elementary, Sacred Heart of Boulder, Ryan Elementary and University Hill Elementary School) and in 2019 it will be ramping up to visit 12 schools.

The organization exposes students to musical instruments and covers the topics of African Rhythms, the Blues scale, and the birth of Cool Jazz over three visits, with the final session being a concert.

Allowing students to experience the first-hand enjoyment of collaboratively creating music under the direction of professional jazz artists, the nonprofit’s curriculum is intended to inspire and educate youth.

Treppeda said, “The festival is gratifying, but when you see the music connect with the kids, it’s transcending. We take it seriously and we spend a lot of money on it.”

Festival director Rachel Cohen said event organizers are planning on 3,000 attendees for the first day of the event and up to 1,000 for the second day.

Event organizers said they need more volunteers. Last year’s event was shored up by 60 non-paid workers. Each volunteer will receive a free ticket to enjoy the event before and after their shift. To help out, visit https://jazzon2ndave.com/volunteer/