Seniors poised to lead Cougars on another deep playoff run 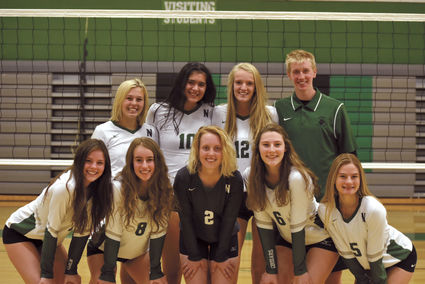 For the first time in four years, there won’t be a number seven in the Niwot varsity volleyball lineup, but second-year head coach Daisha Agho said that the 2017 Class 4A Player of the Year will be with the Cougars in spirit on their quest for the 2018 postseason.

“Of course Mac [Mackenzie Fidelak] is missed,” Agho wrote in an email about last year’s captain. Fidelak led the team to the Class 4A state semifinals for the first time in 20 years. “But she has left our players with the gift of her wisdom and morality…. Her presence will still be felt through all the volleyball knowledge she shared that has helped this year’s crew grow and learn.”

Fidelak left behind more than that, however. With the move to the collegiate ranks, she also left behind big holes for Agho to fill on offense and defense. Last season, not only did she lead the Cougars in kills (275), and kills per set (2.8), but she was also the team’s leading digger (250), and a key mover in Niwot’s first Class 4A semifinal appearance since the late 1990s. Fortunately, Stanford’s newest outside hitter also left behind more than enough players to fill those holes.

The 2018 Cougars bring back a deep lineup that includes five varsity returners, four of whom have college commitments. Headlining are the big middle hitters Emma Falk and Zoe Gonzales, who will drive the offense. Falk led the team and Northern League in blocks last season, with 116, just two off the Class 4A top mark. She was also the team’s top server, landing 96.6 percent with 46 aces. She has committed to the College of Charleston in South Carolina.

Gonzales was second in blocking for the Cougars last year, with 88, and she added 140 kills. The 6’4” right-hander is headed to Wake Forest next year, but first has some unfinished business at the state tournament.

“That game being our very last game, just completely fired us up for this entire season” Gonzales said. In 2017, Niwot fell 3-1 to defending state champions Lewis Palmer in the Class 4A semifinals. “We want to win today, we want to do the best that we can, and we don’t want to end on that feeling of defeat.”

They will be joined by seniors Katie Hirsh and Audrey Richard, who can fulfill multiple roles on the court. Richard has committed as librero to the Colorado School of Mines, but will reprise her role as an outside hitter for Niwot. Also returning is Richard’s fellow future-Oredigger Madison Schoeder, a “smart setter” who “knows how to spread the ball around to utilize our front row effectively,” according to Agho.

Seniors Leslie Grafelman, Annika Turner and Heidi Willis are newcomers to the varsity squad, as are freshman Zoe Gibbs and sophomore Natasha Terekhova, a pair of underclassmen who have Agho excited for the future.

“[Gibbs] has been adjusting well to the pace of the game and I expect her to be a contributing factor to our success this year,” the coach wrote. “Natasha has an incredible work ethic and infectious positive attitude that will help push our team through the season. She has improved immensely on the outside hitter position.”

In all, about 50 players joined the program this season, more than enough to allow for a D-Team. Coaches Colleen Ford (junior varsity), Tricia Grafelman (C-Team), and Erin Schmidt (D-Team) are all back as Agho’s assistants, and Joe Schmidt and Lowell Wightman are helping out this year as well.

Agho did not offer many specifics about her expectations for 2018, but she does expect to see her team contend for the Class 4A title again, even if Lewis Palmer is a favorite to claim the top spot for the fourth straight year. In 2017, the Rangers upended the Cougars at state, but Agho doesn’t want to see her team bent on revenge. Instead, she believes “confidence” and “unity” will help her team prevail in the postseason, as long as they play to their full potential.

“We have a solid group of girls that know the importance of sticking together through thick and thin,” she wrote. “The wins and losses will sort themselves out if we play to our full potential.”