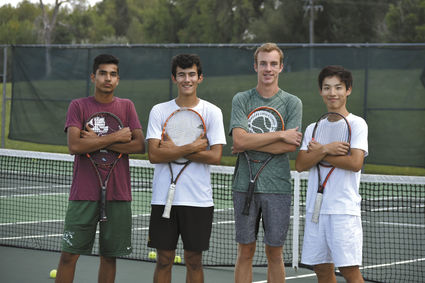 Niwot head boys tennis coach Miikka Keronen’s state-title-or-bust expectations for his team are nothing new, but this year they’re carrying a little more freight. Stinging after last year’s fourth-place finish at the championship tournament in Pueblo—their worst since 2008—the Cougars buckled down during the off-season and are heading into 2018 looking for redemption.

“We don’t like to make excuses, we make adjustments,” Keronen said of his team’s renewed intensity. “We decided to get everyone together and work hard this summer, play some tournaments, and see where it takes us. I thought it was probably the best summer we’ve had in the program history.”

It’s a history Keronen knows quite a bit about. Now in his 15th year as head coach, Keronen has presided over ten straight years of top-four finishes at state, but a team championship has been elusive, despite a wealth of individual talent. That has prompted a bit of reflection from the longtime coach, who made some off-season adjustments himself.

“Instead of just being one way where I tell the kids how it’s going to go, I’m trying to listen more and see also what they think,” Keronen said. “I think it’s been good.”

Heading into 2018, the coach will have another deep lineup at his disposal, including nine returning state qualifiers.

Topping the varsity squad for the second year is sophomore Neil Wilcox at No. 1 singles. As a freshman, Wilcox went undefeated in the regular season, but had a rocky post-season, finishing second to Peak to Peak’s Brett Finan in the regional tournament and then falling to junior Nick Lorenz of Discovery Canyon in the state tournament quarterfinal.

“The 4A No. 1 singles was loaded last year, and it’s still pretty loaded this year.” Keronen said of Wilcox’s prospects with a year of high school competition behind him. “Right now, I would say he’s top three or four in 4A.”

Keronen has a similar assessment of senior Riley Black, who is once again slotted at No. 2 singles. For the past two seasons, Black has been the best Niwot performer at the state tournament, with a second-place finish in 2016 and third-place in 2017.

The coach has a bit of a controversy on his hands at No. 3 singles, where there is currently a four-way battle between seniors Manas Saini, and Riley Mulshine, plus junior Ben Bicknell and sophomore Sam Keronen. Saini, who serves as team captain with his fellow 12th-graders, held that position last season, while Bicknell is a transfer from Silver Creek who is ineligible to compete for Niwot until half-way through the season.

“We don’t know who is going to be at No. 3 singles or No.1 doubles yet,” he said. “But it’s great situation early in the season because it makes kids compete.”

The remaining doubles pairs will be filled by seniors Sam Bickham and Jon Lee, junior Anton Lavrouk, and sophomore Xavier Moy, all of whom played in Pueblo last year. They will be joined by newcomers Dennis Pozhidaev and Ivan Calderon, an unexpected addition to the varsity lineup

“He’s improved a ton,” Keronen said of the sophomore. “If I had to point to anyone that was a surprise to me how much they improved I would say it’s Ivan.”

Once again, Keronen doesn’t anticipate much difficulty in the Northern League, especially since Silver Creek’s top singles qualifier is now with the Cougars. Niwot may also have an easier time at this year’s regional tournament, since Finan, who won last year’s Class 4A singles title as a junior, may cut his high school career short to focus on national competition.

Unfortunately, that won’t do much for the Cougars in Pueblo, where Kent Denver and Colorado Academy have dominated over the last decade.

“Once you get to state, it’s the little things that matter,” Keronen said. “How the travel works out, how the kids are playing at the time. So many little things have to go right to win it. It’s not easy.”

However, as the Niwot girls proved earlier this year, upending the Class 4A tennis status quo isn’t impossible.

“There’s a little competition inside the house,” Keronen said of wife and assistant coach Aimee Keronen, who coached the Niwot girls to the state title over nine-time defending champ Cheyenne Mountain last May. “We obviously both help each other, coaching together, but every once in a while, she’ll give me a little sass about the girls, and I fire back. Hopefully, after October 13th, that will be over.”