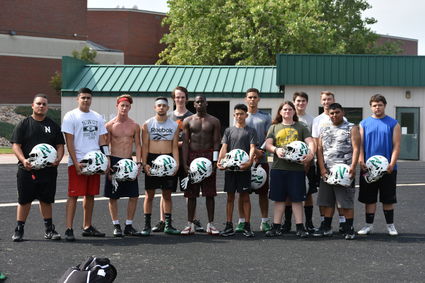 There haven’t been a lot of successes for the Niwot Football program over the past decade, but second-year head coach Jeremy Lanter thinks that may finally be changing. Thanks to a renewed emphasis on character and team chemistry, Lanter said his players have made adjustments on and off the field that will turn their hard work into Friday night wins.

“They want what hasn’t been done here in 12 years,” he said. “They want to accomplish something for themselves. I think that’s part of the reason they’ve worked hard and been so coachable is they want to see those goals around winning come to fruition. Anything we ask them to do, they do a thousand percent. They just are always going so much harder than where we were a year ago.”

It’s not just the players’ attitude that’s changed from a year ago. The Cougars are also coming off a highly productive summer training season that saw an influx of new talent to the program plus a renewed commitment from some returning veterans. That, plus Niwot’s move to the sport’s smaller Class 3A division, give the Cougars their healthiest competitive outlook in a while.

“We’ve built a good schedule that allows us at least the opportunity to compete with people,” Lanter said. “Down in 3A, we’ll fit a lot better with our numbers, and what we see on the other team’s sideline. Just on sheer numbers, we’re in a better position.”

That said, Lanter isn’t entirely sure what to expect from his emerging team this year, but he knows it will be more “explosive,” especially on offense.

Starting at quarterback is sophomore Ayden Bartko, who platooned with senior Matt Baun last season. Bartko, who is tall with a strong, accurate arm, has also been selected as one of this year’s co-captains. He will be backed-up by Angelo Salazar, a transfer student from Woodland Park.

The Cougars have “quite a bit of depth” at running back this season, including returners Liam Flanagan, Julian Molina, and DaeMontae Terry, who impressed Lanter with his off-season development.

“DaeMontae will be a guy who does a lot of things for us,” Lanter said. Terry will also have a role on special teams and on defense in the secondary. “He’s really worked hard in the off-season. He’s put on a ton of weight, he’s gotten very strong and very physical, and he’s got a lot of the speed that we have.”

“Jarett Noterman turns the most heads, though” Lanter said. “He’s a 5’6” or 5’7” receiver, but he’s shifty, and he catches everything that’s in the air.”

On the offensive line, junior Jovani Lopez “makes all the calls for us,” said Lanter. He will be joined by Daniel and Eric Fernandez as well as Daniel Torres.

Lanter is even more uncertain about his defense, but said it will be “aggressive.”

“In our D-line, we don’t have a ton of size that we’re rotating in,” he said. “We’re trying to be very aggressive because of that lack of size. We have a lot of kids who haven’t played the positions they’re going to be playing, but they’re doing a really good for us.”

Lanter is expecting Terry and Molina to be his biggest impact players on the other side of the ball, thanks to some of that aforementioned “explosiveness.” He will also be looking for big plays out of corners Matt Bitterman and Jesus Cardona, who “have good hands,” as well as free-safety and secondary leader Gabe Holtquist.

Special teams is also a bit of a question for the Cougars, but they got a big assist from Stephen Dimit and the Niwot soccer program in the form of senior defender Josh Palomares, who is on loan to the program until a younger kicker is ready to go. However, Lanter might try to convince Palomares to stick around.

“He’s hit nine 50-yard plus field goals just this week,” he said. “We have to back up our kick-off just so he doesn’t kick out of the end zone when we’re practicing kick-off returns. This kid is a natural. He never kicked a football before last Friday.”

Lanter left his coaching staff largely intact from last year. On offense, he will be assisted by Jim DuBois, Stan Matsunaka, Kyle Welty, and NHS alum Ron Stedman, who is returning to the program after a successful stint as coordinator in the 1990s. On defense, assistants are Scott Thomas, Marcus Matthiesen, Mike Byers, Cory Lanter and Tyson Painter.

Though Lanter in heartened by the improvements he’s seen during the offseason, he remains fundamentally cautious about his outlook for the season, saying that he hopes the players get more out of the process than the results.

“I want our kids to win,” he said. “They’ve worked so hard for it. But goals-wise, we’ve got bigger things going on in our lives than winning games.”

It’s one of my biggest heartbreaks a year ago that a lot of kids walked away from their football here feeling very unfulfilled,” he continued. “I really hope that when kids walk away this year, they walk away feeling fulfilled and motivated to continue to improve and work hard. Wins and losses aside, that to me would feel like a success.

“But I think that the kids would like to aim for something that hasn’t been done here in five years, and that’s going .500 or having a winning football season as far as records,” he continued. “I don’t think that will be my measure, but it will be people’s measure of me.”

Year two of the Jeremy Lanter era kicks off at 4 p.m. on Friday, Aug. 24 against George Washington at All City Stadium. However, Lanter himself will be in the stands, serving a one game suspension for a self-reported off-season practice violation. Coach Matsunaka will be calling plays in his stead. On Aug. 30, Niwot welcomes Greeley Central for the first home game of the season.