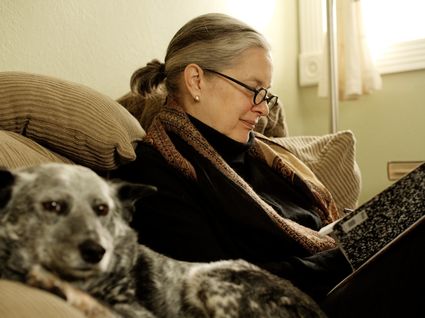 Tod Davies will be presenting a celebration and discussion of the 200th anniversary of Mary Shelley’s book Frankenstein at Inkberry Books in addition to reading from her latest book. Davies is the author of the four book series, The History of Arcadia and two cooking memoirs.

Inkberry Books in Cottonwood Square Shopping Center in Niwot is a gem of a store for reading enthusiasts. While independent bookstores have seen better days since the advent of eBooks and online book distributors, Gene Hayworth and Keith Waters decided their take on a bookstore was just what was needed. In doing so, they have succeeded in bringing literary class to the area by virtue of the types of hardcover books offered and the events they host.

On a weekly basis, the store has scheduled something special for the community, including speaking and reading engagements with local and national authors, poetry readings, live music, artist exhibits, and a book group.

Author and screenwriter Tod Davies will be traveling from her home in Oregon to Inkberry Books where at 7 p.m. on Aug.28 she will talk about Mary Shelley’s 200-year-old classic tale - Frankenstein, a book that has captivated her and deeply affected her work. Davies will also read from her own most recently published book.

Davies is the author of The History of Arcadia series, now a four-book visionary fiction series. Her latest book is titled Report to Megalopolis, or The Post-modern Prometheus. Davies said the premise of the book has its roots in Shelley’s Frankenstein.

Hayworth’s review of Davies’ newest book appears on Amazon and reads, “Spend a day in Megalopolis with Aspern Grayling. You’ll be captivated by his story―fascinating and unflinching in its depiction of human nature and our potential for breathtaking creation and unbridled destruction. Davies has imagined a future world populated with characters who charm and compel in equal measure.”

“What I’m really interested in is finding ways to be more human,” Davies said “The book Frankenstein is told from the view of Dr. Frankenstein, who creates a monster which he then rejects. For the last 200 years, what everyone has been into is how terrifying the monster is. But the book is about the fact that the monster yearns to be human, yearns for human connection, for human culture, for human goals, and yearns for love. But he’s rejected because he’s a monster, so he takes his revenge.”

The parallel to today’s culture, Davies said, is that we have gone too far in the direction of Dr. Frankenstein where we are trying to abstractly create things that purportedly will make our world better. Davies said the atom bomb is one example of that, as is the quest to integrate artificial intelligence into many aspects of our lives.

“The only way to you can produce a more human world,” Davies said “is by engaging with humanity and with human values.” She explained that’s why she was also drawn to write cookbooks. “What you eat every day and who you eat it with, how you enjoy it and they enjoy it, that is a human thing and what we have shared for millennia.”

The books in her Arcadia series are referred to as fairy tales for all ages. The first book in the series, Snotty Saves the Day, begins the adventure with its fantastical look at a world where there’s a sense that something is wrong and there’s a re-imagination of how to do things differently.

Davies’ husband, Alex Cox, is the movie director of Sid and Nancy and Repo Man. Cox taught at CU Boulder where he met Hayworth who, in addition to owning Inkberry Books, is the film studies subject specialist and the director of social studies at the CU libraries. Inkberry co-owner Waters is also a professor at CU, teaching music theory in addition to being an accomplished jazz pianist who occasionally performs at the store.

The evening with Davies will include a presentation about why Mary Shelley’s Frankenstein is so compelling and ageless, and a reading from Davies’ latest book followed by a reception.

For more information about Inkberry and a complete calendar of events, visit http://www.inkberrybooks.com/index.htm .