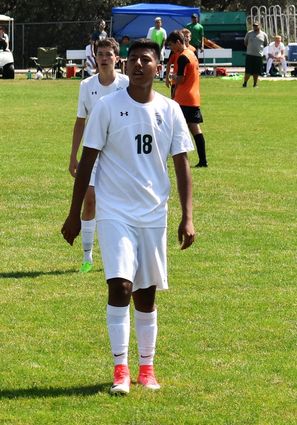 Jonathan Jimenez-Flores returns this year as one of the top threats on offense.

There may not be a lot of familiar faces when the 2018 Niwot boys soccer team takes the field for the first time on Aug. 21, but that doesn’t have Head Coach Stephen Dimit too concerned. Though he lost half of his 2017 varsity roster to graduation, the third-year head coach replenished his stock from a “super-motivated” pool of underclassmen and seems ready to take the Cougars on another deep run in the Class 4A state tournament.

“We have a collection of young players, and we’re going to start to rebuild that today,” he said, as the 2018 varsity squad took the field for the first official practice. “They’re good. They’re talented. They’re not the big giant guys that we had last year, but they’re fast, and they’re smart. It’s going to look very different, but so far they have risen to the challenge.”

That challenge is still in the early stages, of course, and Dimit knows that it won’t be easy to repeat last year’s success. Led by high-scoring seniors Jason Rodriguez and Andreas Montealegre on offense and battle-tested seniors Nicholas Grant, Cam Lee, Tyler Crall and Abel Marrufo on defense, the 2017 Cougars outscored their opponents 64-19 on their way to a 15-2-2 overall record. They finished second in the Northern League, and won three straight playoff games before losing in the Class 4A state semi-finals to conference foe Centaurus, the same team that ended their bid for an undefeated season in the regular season.

“Carter Kruse is a sophomore who has come out and been a very good vocal leader in the back,” Dimit said. “So we’re already looking for him to fill an important role. Daniel Cho missed his sophomore season due to a knee injury, and we weren’t sure what he was going to be able to do. But he came out and he was instantly an impact player for us.”

Dimit is also bullish on freshman Mason Wright, “a good outside back” who he hopes to have on the line for all four years.

They will be joined by seniors Josh Palomares and Aldo Rodriguez, and juniors Manual Soto and Emrik Wells.

Returning keeper Mario Muñoz will help keep some of the pressure off the youthful defense.

“Mario’s there, and he’s going to be real important to teaching those guys in games even,” he said. “He’s going to be that second coach on the field.”

Now in this third year as a starter, senior Muñoz has been a key factor in the team’s regular season success over the past two seasons. In 2017, he allowed 17 goals in 17 games, the second best average in the Northern League and eighth best in Class 4A.

Graduation didn’t leave the offensive cupboard entirely bare. Returning to the 2018 squad are senior forwards Manuel Tapia and Jonathan Jimenez-Flores, who combined for 23 goals and 15 assists last season. Tapia, whose 16 goals were second highest in the Northern League, will also serve as Muñoz’s backup, following his successful two-game stint in goal during last year’s state tournament.

They will be joined up front by “good young attackers” Ishmael Dominguez, Keegan Stobbe and Aidan Martin, all sophomores, who will be filling the spots left vacant by Rodriguez and Andreas Montealegre, whose combined 59 points will be hard to make up.

“Our depth is just enormous on the attack right now,” Dimit said. “Keegan can play the kind of role that Andreas did. He’s a similar player. Aidan gives us an entirely differently look, because he can shoot from anywhere on the field. And Ish gives us a lot of the speed that we miss from Jason.”

At midfield, Dimit will have a returning senior in Jesus Gonzales, plus a trio of returning juniors in Austin Borncamp, Nicholas Haratsaris, and Jared Osteen. Sophomore Connor Grant will also be with the varsity squad this season.

As is his habit, Dimit has the Cougars facing a formidable non-conference schedule in preparation for another grueling year in the Northern League. This year’s lineup includes crosstown rival Skyline, Class 5A powerhouse Legacy, and then defending Class 4A champion Air Academy, all in the same week. 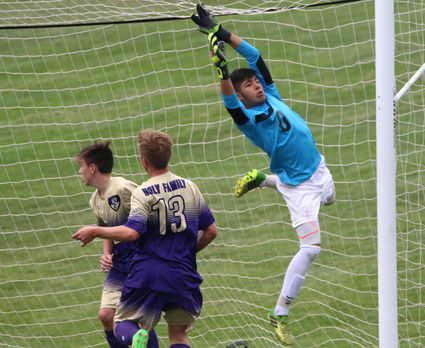 “We re-established ourselves as one of the best teams in the state last year,” Dimit said. “Top teams plays top teams, generally. Going into league, there’s no better test.”

Niwot will have to wait until Oct. 2 for a rematch against Centaurus and the Cougars finish the regular season against rival Silver Creek, a game that is likely to have Northern League title implications.

“Both return really good attacking players,” Dimit said of his main conference rivals. “But both were hit pretty hard, like we were, defensively by graduation. I’m glad we get to rebuild and reshape our teams before we all have to play each other. I think we’re all going to need a little bit of time before we have to go into those games and figure them out.”