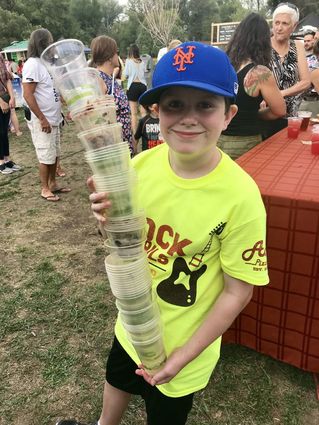 Former Rock & Rails Volunteer of the Week Jason Champion carries a stack estimated to be 57 cups long at the weekly concert series on Aug. 2. His record is 63 cups.

Thanks to his regular gig as a Rock & Rails gargoyle, Griffin Harris was able to check two major items off his summer to-do list: earn 10 community service hours, and have some fun.

“I’m trying to get a rank, so I started doing this to get Boy Scout hours,” Harris said. He is hoping to earn his first and second-class ranks in Niwot Troop 161. “But, I’ve already surpassed 10 hours, so...