National Night Out returns to Niwot 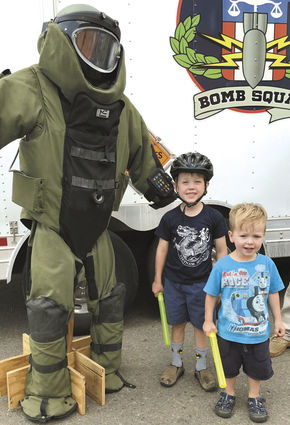 Community members enjoyed a demonstration of the bomb squad’s equipment during last year’s National Night Out, held Aug. 1 in Niwot.

The Boulder County Sheriff’s Office is once again teaming up with the Niwot Community Association (NCA) for National Night Out, an annual countrywide celebration that brings police and first responders into local neighborhoods for an evening of camaraderie and fun.

“It’s a way to get the community, especially kids, more comfortable with first responders,” NCA President David Limbach said. “We want to build that trust.”

This year’s free event is slated for Tuesday, Aug. 7 from 6-9 p.m. in Old Town Niwot. One block of Murray Street between Second and Third avenues will be closed for the duration.

Representatives from the BCSO will be on hand for a demonstration of some of their newest high tech crime fighting tools, including the SWAT team’s Bearcat civilian armored rescue vehicle, which the department purchased in 2012 with a Department of Homeland Security grant.

There will also be demonstrations by the K9 and the bomb disposal units, and a surveillance drone contractor has been invited to the event.

“I’m really excited about seeing some of this equipment,” Limbach said,“especially the Bearcat. How could it not be cool with a name like that?”

Other local agencies will have staff and equipment on hand, including the Longmont Emergency Unit, the Colorado State Patrol, and the Mountain View Fire Protection District, which is hoping to bring Sparky, a favorite of children, and its antique Engine #10, which was last active with the Niwot Volunteer Fire Department in the early 1980s.

The BCSO and NCA will also be providing free food for attendees, including hot dogs and hamburgers, plus all the fixings. Target has also donated ice cream. Entertainment is courtesy of the Niwot 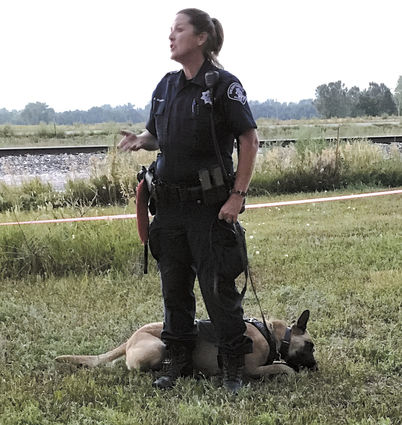 A deputy from the K9 unit gives a demonstration during last year’s National Night Out, held Aug. 1 in Niwot.

Community Semi-Marching Free Grange Band, which has added some new songs to its set list to help set the mood for the safety-oriented evening, including “Stayin’ Alive” for first responders, “Light My Fire” for firefighters, “Born To Be Wild” for the Colorado State Patrol, and “Peter Gunn Theme” for law enforcement personnel.

This marks the event’s second year in Niwot after several years in Heatherwood. The BCSO is also hosting NNO events in Boulder, Lyons, and Superior. Limbach thanked a number of people both in the BCSO and NCA for helping to make the family-friendly commemoration

“Deputy Mike Kaessner is the lead organizer for NNO, and gets a lot of help from Carrie Haverfield and Bob Philbrick,” Limbach said. “From the NCA our event coordinators, Kim Hawksworth, Julie Breyer, and Kathy Koehler have all contributed a lot of time advertising and preparing for NNO - this in the wake of all their work on the Fourth of July event. Finally, the NCA road crew will be instrumental to the road closure.”