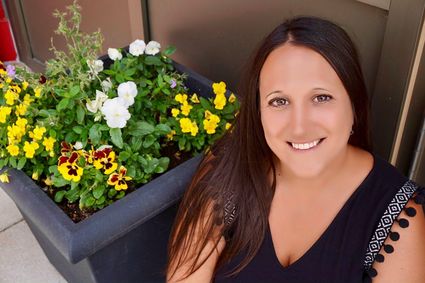 Holly Owens notices when things need some of what she’s good at – adding a little sparkle. When she moved to Gunbarrel, she sensed Heatherwood Elementary School (HES) could blossom with her loving touch. Because of her enthusiasm and hard work, Owens has been selected as this month’s Left Hand Laurel.

Owens had never heard of Gunbarrel when she lived in South Boulder. But when friends moved to the area and the Owens’ family was invited for a barbeque, they too were lured by the larger yards and the proliferation of young families. Six years ago Owens, her husband Chad, their son Mason (12) and daughter Campbell (9) followed suit and moved to Heatherwood.

It took Owens one day to become part of the Heatherwood community. Spotting a moving truck in front of the Owens’ new home’s, a neighborhood mom with a child the same age as the Owens’ son stopped by and told them about HES’s summer activities, including a summer reading program. The deal was sealed, HES was where the kids would attend school and where Owens would find her own hub of activity.

“Our neighborhood is so cool, because the people who are in it are so community-focused,” Owens said. “I’ve never known such a community. When I got pregnant with my third child, the community rallied and we had meals for a month and people reaching out who I didn’t even know.” Their third child, son Murphy, now 5 years old, will be starting kindergarten this fall.

Owens jumped in and became “super-involved” with everything from the Parent Teacher Organization to School Age Care (before/after school) club to the gardening club. Owens is now HES’s “landscaper,” shoring up the garden beds in early spring and caring for each plant through fall. She used to lug buckets of water from her house, along with her garden tools. Now, with the help of HES’s janitor, Mr. Bob, Owens can access water from the school building.

Each summer she and sometimes her entire family, do a summer project at the school. Last summer they refreshed the paint of the giant U.S. map on the playground. This summer, they will be adding another garden bed near the school flagpole.

“I’m trying to teach my kids to give back,” Owens said. “I’m trying to get them to really understand that sense of community, what you’re doing in the world and how much it matters.”

When resources are needed for the school, Owens has no qualms about asking local businesses to pitch in, and her enthusiasm garners in-kind donations, including mulch, dirt, and pots from Home Depot.

She also created the event “Pastries with Parents.” Each spring, students invite their parents and grandparents to enjoy a sweet treat on the school grounds. Thanks to Owens, Whole Foods provides the pastries.

“This is a way for the children to say thank you,” Owens said. “Everyone just shows up and doesn’t have to do anything except be together.”

As for any January doldrums, Owens said, “I wanted to make the whole front of the school a winter wonderland for the kids when they got back from break.” So she made a heap of paper snowflakes and paper chains and enlisted Jolie Evans’s second grade class to make even more. She hung the decorations with white lights in the entryway of the school. The transformation made for a magical feeling when the kids walked through the front door to return to classes.

“Holly is a gem, she loves her community,” Evans said. “She wants to quietly provide a beautiful community that people, students, teachers, neighbors and families can be proud of. She puts endless hours into her flowers, plants, secretly painting the playground, decorating hallways into winter wonderlands, dropping off May Day baskets secretly to neighbor’s doors, and more. She doesn’t do it for the notoriety- but because that’s how she shows her love. She is love, and we are so lucky to have her as part of our community.”

Assistant Principal Julie Cutshall said, “With her abundant positive energy and caring attitude, Holly Owens is a true advocate for Heatherwood Elementary. Holly is constantly finding ways to enhance and support Heatherwood through her volunteer efforts.”

Owens is a “domestic engineer” and has a degree from the University of Northern Colorado in speech communications and journalism. She worked in retail clothing for many years before having kids. In addition to her dedication to HES, for the past four years, she’s been a volunteer for the Boulder Cotillion.The organization’s goal of teaching kids appropriate social skills is near and dear to her heart.

When asked what she’ll do when her children no longer attend HES, Owens said she’ll keep gardening at the school. “I’ll be the little old lady they can’t get rid of.”