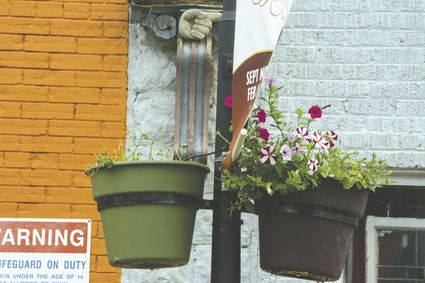 Photo by Jocelyn Rowley The hanging containers in front of Wise Buys Antiques sustained different degrees of damage during a storm on June 19. The container on the right was protected from the 1-inch hail by the post and the flag.

The abundance of vibrant, carefully-maintained flower pots that has long been a signature of the summer season in Niwot was devastated by the midday hail storm that roared through town on June 19.

“Almost every single container suffered some kind of damage,” Chuck Klueber of the Niwot Business Association Streetscapes Committee said. “Some weren’t damaged as badly as others, because they were protected by trees or posts or flags. It just depended on where they were.”

Using funds furnished by the Niwot LID, the NBA plants, waters, and maintains more than 130 potted containers throughout the business districts each summer. This year, the NBA requested $21,500 for the flowers, an increase of nearly 20% over 2017.

According to Klueber, the fierce storm that produced 1-inch diameter hail damaged up to 80 percent of the potted annuals, with containers in Old Town absorbing the brunt of the impact. Especially hard hit were pots on the south side of 2nd Avenue, and the east side of Franklin Street.

Kevin Dooley, who assists with regular maintenance under the supervision of Carrie Wise, performed damage control in the immediate aftermath of the squall.

“We removed all of the fallen matter as well as the shredded leaves, and then I cut them back,” he said. Loose fir needles and debris also collected in the pots, further damaging the plants. “They looked better, but they still looked forlorn.”

For now, the NBA has decided to rescue the remaining potted flowers rather than undertake the expense of replacing them, which could run as high as $8,000.

“We’re going to hope and pray over them,” Klueber said. “We may buy a few more [flowers] to fill in holes, but there’s no wholesale plans to replace them.”

Klueber and Dooley are both optimistic about chances for recovery, especially as a number of factors are working in their favor. First, it’s still early in the summer, and there are a few weeks of prolonged daylight remaining this year. Also, unlike a damaging frost, almost all of the plant injuries occurred above the soil, and if roots remain intact and undamaged, the regrowing process should start almost immediately. 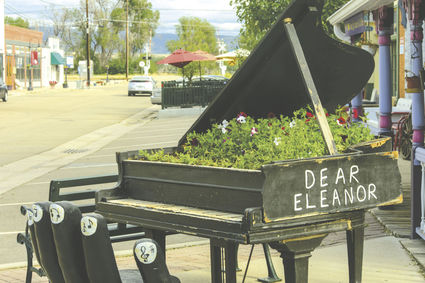 Photo by Jocelyn Rowley In the piano planter, those plants under the lid sustained little damage from hail during the storm on June 19, while the exposed rows were destroyed.

Dooley had mixed feelings about the decision not to replace the flowers, but understood the NBA’s reluctance to incur another large expense. He also wondered what measures could be taken to help offset losses from future storms.

“If you don’t get a perfect solution this time, you can plan for a better one next time,” he said.

In the meantime, Dooley is looking forward to nursing the injured plants back to health.. As of now, there are no extraordinary measures in the works to boost the chances of success. Dooley and his team will continue their regular schedule of watering and maintenance, but with an added dose of TLC.

“All of the pots have enough life in them,” Dooley said. “I think they’ll come back, but whether it’s a month or a couple of weeks, I don’t know.”