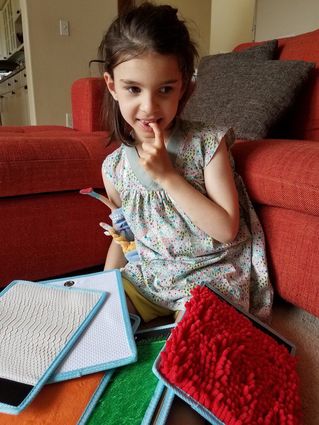 It was winter when the Makovec family uprooted their lives in Colorado to begin an experimental genetic treatment for seven-year old Mila in Boston. All efforts were focused on Mila at that critical juncture as she battled against Batten CLN7 disease, a fatal neurodegenerative disease which has been robbing the previously normal little girl of her of her sight, mobility, cognitive and speech abilities.

The diagnosis of Batten Disease a year earlier radically changed the family's life and set them into perpetual motion to discover a cure for Mila and others with the disease.  Mila’s Miracle Foundation was started by her parents, Alek Makovec and Julia Vitarello, to fund scientific research and treatments they hope will ultimately result in a cure for Batten Disease and other neurodegenerative conditions.

Mila’s story came to the attention of a group of scientists in Boston with an idea for a treatment they thought could help. In January 2018, they launched an investigational trial and invited the family to move temporarily to Boston.

Because it was in the middle of a raging flu season and Boston weather was ultra-cold and snowy, the family decided to seclude itself in a rental home from January through March, giving Mila the best chance to stay healthy during her treatment. Caring friends and family shipped them entertainment provisions to make the time pass more quickly.

“We ended up having tons of art projects, tons of books, and tons of creative toys” Vitarello said. ”We were inside building towers and baking, and had art projects all over the house.”

Makovec and Vitarello did their best to settle into a typical life for Mila and her younger brother, Azlan.  Makovec traveled back and forth to Boulder every week or two to continue working. Eventually the family was able to be around other people and could go grocery shopping, visit aquariums where Mila could feel the starfish, and play in parks where she could hear ducks quacking.

They enrolled Azlan in a small preschool where he could be with other kids. Not surprisingly, within two days he came home sick and then Mila got sick too. Fortunately, she recovered quickly and her treatment wasn’t jeopardized.

Life became more normal, but was punctuated by hospital visits for Mila’s procedures. While the treatment went smoothly, their time spent in the sterile medical environment was exhausting for everyone.

Vitarello wrote in her blog, “Tomorrow, Mila will receive an injection of a new medicine that will go directly to her brain. It is experimental, which means it could be that breakthrough treatment that makes the impossible become possible. Or it could be a valiant attempt that just falls short. She could be the pioneer whose life is saved, or the one whose sacrifice helps those that follow.”

The family returned home to Niwot a week ago and where there had been snow in their front yard, peonies bushes now fall over from the weight of their flowers.

“It’s very strange to be in this house and to be able to breathe. Last time I was here I was racing…I was racing to stand up for Mila when it came to the scientists, racing to raise money, racing just to make everything happen,” Vitarello said. ”Now I feel like I’ve done almost everything I could to give her a chance.”

It’s time to just let Mila be a kid, her mom said. There will be no hospital visits for a while. She’s back at the preschool she loves. The horseback riding and yoga she does each week are beautifully disguised therapies to keep her strong and healthy.

“Mila’s trying hard to communicate and I’d really like to find someone who’s dedicated to helping her with that. It’s not like she hasn’t spoken before, similar to a stroke victim, so we’re looking for a good speech therapist for her,” Vitarello said.

Her vision is completely gone and for now the idea of reversing that is not on the table. But the family is working hard to find ways for Mila to experience the world around her.One of the things that most enthralled and lifted them while in Boston was the two weeks Mila spent at the Perkins School for the Blind. The school’s expertise in disabilities empowered the family with new methods of interaction.

“I’m trying to give her brain a chance to possibly benefit from this treatment and maybe improve some of her skills,” Vitarello said.

While she’s not able to disclose details about the experimental treatment just yet, Vitarello did say it involved being “in and out of the hospital countless times.” In the near future, once the doctors have presented their findings, additional information will be shared with the public.

Vitarello will continue to run Mila’s Miracle Foundation. She is more determined than ever to turn her fight for Mila into a fight for many other children suffering from similar neurodegenerative diseases, and she is in the process of revamping her foundation to make that happen.

While in Boston, Vitarello said her foundation hosted a two day meeting with 15 top scientists from around the world to brainstorm about Mila's type of Batten Disease. The hope is that the combined knowledge of this group of scientists will lead to further understanding of Batten, and possibly other diseases such as Parkinson’s disease.

“The idea was to use this meeting to launch various projects,” Vitarello said. “So now we are going to be funding some of these scientists who have ideas on how they think they can crack this disease.

“There are similarities between Batten and more prevalent diseases. We tried very hard to choose people who could have a big impact beyond Mila’s form of Batten and were willing to collaborate across institutions to make that happen. ”

When asked if she’s seeing improvement since Mila underwent treatment, Vitarello said ,“There is enough reason to believe that what we’re seeing is showing hope.”

If she had started treatment earlier, Vitarello said she believes Mila’s decline would have been less severe.  She is cautiously optimistic and feels that since going through the treatment in Boston, Mila is having more good days.

Vitarello writes in her blog, “There are still moments and even full days when my heart sinks as I struggle to connect with her. She sits quietly with her head hanging low. Walking is slow and her feet drag with each step. But there are even more times where her reactions are sharp and her radiant energy fills the room. Her head is lifted high and her eyes are bright with curiosity and excitement. Her laughter is genuine. I beam as I watch how alive she is.”