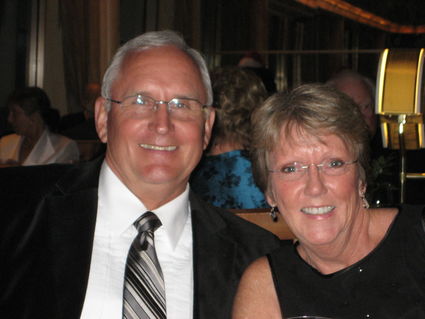 Courtesy Photo Dick Piland (pictured with wife Dixie) has been a part of the Niwot Community Association for many years, and Dick has been named the Grand Marshal for the 2018 Fourth of July parade in Niwot.

A dedication to problem-solving on Niwot’s behalf is among the reasons Niwot Community Association board members chose former chair Dick Piland to serve as the 2018 Grand Marshal of the town’s July 4 parade.

“I am honored to serve as Grand Marshal,” Piland said. “But frankly, I was very surprised to be nominated. I think there are several others more deserving than I am.”

Piland’s willingness to pitch in is a strength others appreciate. “Dick jumps into projects without reserve,” said fellow NCA board member Kathy Koehler. “If something needs to be done or a project needs support you can usually anticipate that Dick will help if he is available.”

The 2017 National Night Out event in Niwot was a good example of Piland pitching in, Koehler said. “About 30 minutes before the start of last year’s event, it was learned that the supplier of the grills ordered by the Boulder County Sheriff’s Department for cooking food weren’t going to be delivered on time,” she said. ”So Dick jumped in a truck, headed home and brought his own grill to the event! We had food cooked and ready for guests when the event started, thanks to Dick’s help.”

One project that Piland enjoyed was taking a leadership role, along with current NCA President David Limbach, to coordinate the process to meet Boulder County’s 2012 revision of special event regulations for parades and closing roads for parades.

The first group to have to comply with the new county regulations was the NCA, which paid $3,800 to an outside company to draw up a transportation plan and parade route, and supply, set up and take down road closure signs and barriers for the 2012 Nostalgia Days parade.

“Niwotians love their parades, and with the new county regulations it was becoming way too costly for our non-profit groups to run parades,” Piland said. “I saw us losing all our parades. The NCA board agreed, so we approached our town’s nonprofits about buying our own signs and barriers and then handling the process ourselves.”

Piland was part of the group that sought donations from several non-profits, Niwot High School and the Niwot Local Improvement District, to fund purchasing signs. Left Hand Grange No. 9 offered space for storage and the NCA serves as “librarians” for the road signs and barriers. NCA members also drew up a process template for other groups to follow in order to meet Boulder County guidelines. Lastly, a volunteer “road crew” was recruited.

“It all just came together and groups and people stepped up,” Piland said. “That’s what I love about Niwot – all the people who care about the town.And working on the volunteer ‘road crew’ is really fun,” he added, grinning.

“It was wonderful having the students step in to do this project,” Piland said. “And it happened because NCA board member Johnny Barrett suggested that we work with them, which is just another example of people stepping up in this town.”

Piland’s first stint on the NCA board was from 1992 through 1994. He was originally drawn to volunteering with the NCA because, as a volunteer umpire with Niwot Youth Sports, he had worked with a lot of parent volunteers to build the Nimbus ballfields, now known as the Biff Warren Baseball Complex. “All those parents volunteering and working hard impressed me and motivated me to volunteer too,” Piland said.

Piland was lured back to board service in 2009 when the controversy over Boulder County’s responsibility for rehabilitating unincorporated subdivision roads issue surfaced. He was elected NCA president in 2013 and stepped down from that role in April 2018.

“I served on the original working group put together by Boulder County to try to find a solution for fixing our roads,” Piland said. “That grew into trying to put into place many other solutions, none of which have been successful -- yet. But it kept me involved in the NCA’s leadership.

“The roads problem has continued, despite a lot of hard work by a lot of people and Boulder County folks. It’s probably the most frustrating issue I’ve had to deal with.”

During that time, Piland conducted many public meetings to explain the problem and possible solutions.

It may be a frustrating issue, but Koehler praised Piland’s tenacity and hard work. “Dick has worked tirelessly to get our Niwot roads upgraded and repaired with the least economic impact on residents,” she said.

“Dick has been such a constructive, thoughtful, creative force in addressing transportation in Niwot. He is always looking for a path towards resolving problems in a way that represents Niwot’s best interests,” Gerstle said. “He’s a problem-solver, a tough negotiator, and a really, really nice guy.”

What attracted Piland and his wife Dixie to move to Niwot in 1990? Piland had ended his 20-year career in the military and was flying for United Airlines.

“In the military, you move all the time so your roots are shallow,” he said. “We wanted to find a place where you would have to use dynamite to make us move! We just loved the small-town feel and the large spirit of giving back in Niwot.”

The community will have a chance to show its appreciation for Piland’s efforts during the 4th of July parade, but he will have to pass on being part of the road crew this year.