Student of the Week: Rachel Clark 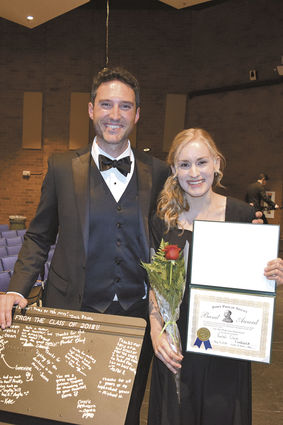 When announcing that horn player Rachel Clark was the recipient of the 2018 John Philip Sousa Award at the Niwot’s band’s final performance of the year, director Wade Henricks told his audience that “high school programs are built around students like Rachel - they are pillars of the band that remain long after the student has graduated. I'll happily live in the house Rachel has helped build.”

The John Philip Sousa Award is bestowed annually “in recognition of superior musicianship and outstanding dedication." For Hendricks, Clark was the natural choice for this national honor.

“I would say her level of playing is in the top one-percent of high school musicians around the country,” he wrote in an email. “The fact that she has participated in band for eight semesters in high school when so many other extra-curricular activities are available and competing for her time is a true testament to her dedication.”

Clark took up the French horn as a fifth grader, determined to differentiate herself from her three older brothers who played either the trombone or trumpet. She continued to play through middle school, and then, joined the marching band when she came to Niwot as a freshman.

“I always wanted to go to Niwot and be in the marching band,” she said, having watched her three older brothers go through the ranks. “I grew up going to football games and watching my brothers perform and lead the band in parades.”

Clark’s talent was evident early on, and she quickly assumed a leadership role. She was elected drum major at the end of her sophomore year, a post she called “a little bit daunting” for underclassmen.

“It’s a little scary, because you’ll potentially be leading people who are older than you,” she said. “There’s a lot of pressure and a lot that comes with it, even after school hours.”

For Hendricks, however, Clark was a fit at the helm, even from a young age.

“I really trust the members of the band to decide the drum majors - they understand the importance of the decision and know what makes a good leader,” Hendricks wrote. “She does well in the face of adversity and has a presence that not many high schoolers have.

Clark’s skills also attracted attention outside of Niwot. She received a number of district and state-wide honors during her four years in high school, and was named to the prestigious All-State Band and Orchestra ensembles for both band and orchestra for two consecutive years, and has also been a member of the Denver Young Artists Orchestra.

“These are the most select ensembles in the state,” Hendricks wrote. “The audition music is challenging and oftentimes the results come down to subtle nuance because the level of playing is so high. The best musicians from every high school vie for these spots - the fact that Rachel participated in these ensembles multiple years shows how extraordinary her skill level at French horn is.”

This fall, Clark will be heading to Wheaton College outside of Chicago, home of a well-regarded conservatory of music. However, she plans to study neuroscience as an undergraduate, and hopes to eventually pursue a full time career in research. Though she plans to keep music in her life, she doesn’t necessarily see it as a full-time vocation.

“Music has really been an outlet for me all throughout high school,” she said. “It’s helped me balance my academic life with my music life and my social life. It’s given me a really good break, and it’s something I’ve always really enjoyed doing, and I never want to stop playing.