Photo by Katie Rowley Sunflower Farms, located at 11150 Prospect Rd., won approval from Boulder Country to become a Demonstration Farm and will resume its educational programs later this summer.

A little more than three years after they were ordered to suspend their educational programs due to violations of the Land Use Code, owners of Longmont’s Sunflower Farms received conditional approval from Boulder County Commissioners to operate as a Demonstration Farm, a move that will allow them to relaunch their SproutHouse preschool and day camps later this summer.

“I know your path has been a little longer than some other applicants,” Gardner said before the formal vote. “I know it does feel like an extreme process at times. But we are always trying to balance individual needs against the bigger community. I think you understand serving the community, so I hope you can appreciate that.”

It was a path Frisch and Roberts never anticipated would take so much time and money to travel.

A few months after they shuttered their popular preschool and agricultural camps in March 2015, Frisch and Roberts entered into an agreement with Boulder County that would bring the property into compliance with both the Land Use Code and the Conservation Easement after certain conditions were met. They had to obtain numerous building permits for earlier construction on the farms’ outbuildings; install a new septic system; construct accessible bathrooms; and extend paved sidewalks throughout the property to ensure wheelchair accessibility.

“The punch list was endless,” Frisch said of the arduous back-and-forth process, which ended up consuming the better part of three years. “It didn’t always make sense to us, and we had to finance it, and we didn’t always agree with it, but I really respect now looking back that we got through it.”

Frisch has been busy since the hearing gearing up for the revival of the SproutHouse preschool, a child-driven, farm-based program for children age three and up that is meant to be an antidote to ‘nature-deficit disorder.’ There’s no rigid daily schedule, and students can expect to spend most of their time outside, even in inclement weather. Most activities are hands-on, including gardening, beekeeping, making soap, and interacting with the farms’ estimated 125 animals.

Frisch and Roberts are also relaunching the school-age farm program for homeschool students, consisting of once or twice weekly full-day sessions of farm chores, such as animal care and gardening. Both it and the preschool will resume classes in mid-August, in accordance with the St. Vrain Valley School District calendar. School-break day camps are also back on tap, with weeklong sessions slated for December.

There are still a few pending matters before the county and state give their final blessing, including building inspections and official sign-off on a childcare license. Sunflower Farms is also subject to capacity and traffic limits, which could affect the number and type of field trips they can schedule. Then there is the matter of the free-ranging chickens, which may have to be penned during SproutHouse sessions in accordance with county health regulations.

“We’re going to do what we need to to get it up and going,” she said. “We did a livestock plan and a poultry plan, and we submitted it, and they’re going to help us do it right.”

Ultimately, Frisch said she was more relieved than anything else after the commissioner’s approval, and now she is just focused on moving ahead. 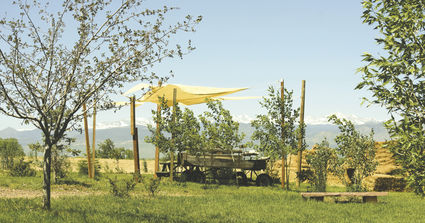 Photo by Katie Rowley Sunflower Farms, located at 11150 Prospect Rd., won approval from Boulder Country to become a Demonstration Farm and will resume its educational programs later this summer.

“Farmer John [Roberts] and I just really love what we do, and we believe in it,” she said. “We think it has its place in this world, and it needs to stay.

“There were so many levels of grief and loss and doubt those three years,” she continued. “But it’s not even about why it was so hard for us. It was worth it just to get that stamp. The bottom-line is that Sunflower is going to be open. It has the right now to stay open to the public and be a Demonstration Farm.”

Sunflower Farms is located at 11150 Prospect Rd., and is open to the public during the summer from 9 a.m. to 1 p.m, Thursday-Sunday. Tickets must be purchased in advance. Enrollment for the school programs begins on June 14. For more information on Sunflower Farms or to purchase tickets, visit their website at sunflowerfarminfo.com.