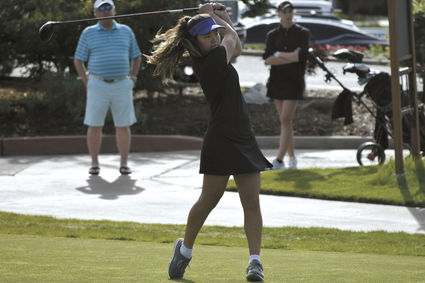 Photo by Jocelyn Rowley Freshman Halie Ostrom tees off on the tenth hole at the Country Club of Colorado Springs on day two of the Class 4A State Girls Golf Championships (May 21-22).

The Niwot girls golf team capped off its memorable 2018 season with a hard-fought top-10 finish at the Class 4A Championships held May 21-22 at Country Club of Colorado in Colorado Springs.

Freshman Halie Ostrom led the Cougars with a +54 for the two-round tournament, which was good for 36th place overall in the 84-player field. Senior Mya Ostrom and sophomore Julia Solem both shot +66, tying for 49th-place. Niwot ended with a total score of 612 over the two days, to finish ninth out of 14 in the final team standings.

Frustrations abounded for the inexperienced Niwot squad at the technically-challenging, par-71 course located at the base of Cheyenne Mountain, particularly on the opening day. Solem, who finished fourth at the regional tournament on May 7, shot a 108 (+37) for the round, her highest score since early 2017. Halie Ostrom ended the day at 100 (+29), while her older sister Mya was +36.

“It was tough and it was emotional,” Weaver said of his team’s early struggles. “They were doing things they normally don’t do, like missing short putts.”

Weaver was heartened by how the players bounced back in the second round, improving by nearly 20 strokes. Halie Ostrom carded a 96 on day two, Niwot’s only sub-100 mark of the tournament, while Solem took eight points off her score. Mya Ostrom improved by six strokes off to end with a 101 (+30). Though she acknowledged it wasn’t her best performance, she said the state tournament was a “fun” way to close out her high school career.

“The course was very beautiful,” she said. “The greens were fast and unpredictable, but that’s okay because I still made a lot of two putts. The people I played with laughed at my jokes, and that was nice.”

After graduation, the elder Ostrom is heading off to South Dakota School of Mines in Rapid City, where she will be continuing her golf career while pursuing a degree in engineering.

The course proved unforgiving, not just for Niwot’s crew of first-timers, but even for Class 4A’s top competitors, including defending champion Lauren Lehigh of Loveland, who was +17 for the tournament and finished second to Maxine Choi of Cheyenne Mountain (+16). No player in the entire field finished either round with a score under 78 (+7).

“The courses should test the girls,” Weaver said. “But there’s a fine line between testing and frustrating, and there were parts of that course that frustrated everyone.” 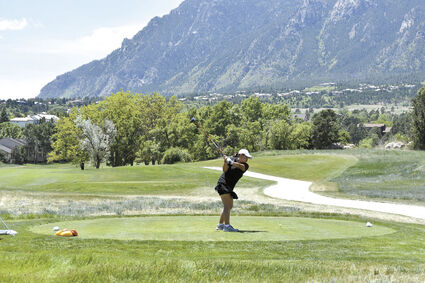 Photo by Jocelyn Rowley Senior Mya Ostrom tees off at the Country Club of Colorado Springs on day two of the Class 4A State Girls Golf Championships (May 21-22).

As for his underclassmen, Weaver said the difficult rounds at Cheyenne Mountain will pay dividends next season and beyond.