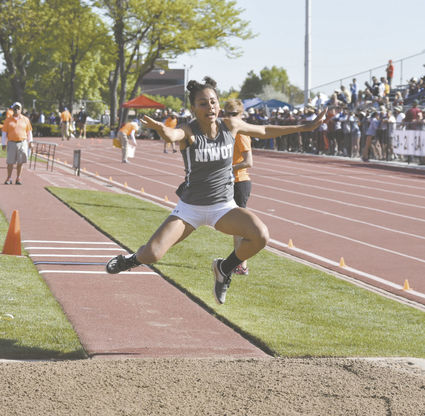 Photo by Jocelyn Rowley Niwot senior Sophie Grant competes in the triple-jump at the 2018 Class 4A state track & field championships on May 17.

Neither rain, nor cold, nor Valor Christian could dampen the spirits of junior Maggie Smith and the Niwot girls 4x400M relay team on the gloomy final day of the 2018 Class 4A State track & field meet, held May 17-19 at Jeffco Stadium.

With a time of 3 minutes, 55.64 seconds, Smith, Erika Timbang, Kelia Portis, and freshman Taylor James cruised to the state title in the mile relay, beating Valor by more than 1.5 seconds, and putting a bow on a impressive weekend that saw the Niwot girls score points in 15 of 19 events, with state titles in two and silver medals in another four.

“All of us have been going pretty much like last June to prepare for this meet,” Smith said. “I think our athletes really held up under the pressure well. We treated it like any other meet, like we’ve been doing this season, and we performed how we’re capable. I’m really happy that we came out so well.”

Unfortunately, Niwot’s record-setting weekend would not be quite enough to overcome a historically dominating performance from the Eagles who had at least one finalist in 17 of 19 events and secured the team title with an astounding 151.50 points to Niwot’s 114. Nevertheless, Smith and her teammates were happy to see their year of hard work pay off with a historical performance of their own.

“Our team culture is phenomenal,” she said. “All of the upperclassmen, everyday we’re working on our leadership, and bringing up the young kids. We want to develop a culture that’s more focused on team values, not just individual titles. That’s why I think we have so much depth.”

“Our team motto is ‘Grit’,” James added. “That’s what we’ve been working towards, getting stronger no matter the conditions, like today, and we’ve just worked really hard as a team, we’ve all come together, and we’re enjoying it together.”

“I’ve never felt so good leaving a meet finishing second, knowing that any other year we would have outscored everyone,” he said, after Niwot extended its streak of top-three finishes at state to six. “Hats off to Valor. We knew they were tough going in, and we knew we’d give them a tough battle. I think we competed, but they’re loaded.”

Niwot kept pace with the Eagles through the early events, and even led the team scoring through the first eight events. The Cougars got an unexpected boost early on when senior Sophie Grant took fourth overall in the triple jump with a personal best mark of 35 feet, 3 inches, beating her previous best by more than eight inches. Grant, who skipped her junior track season and then joined the team late this year due to a back injury, also later qualified for the finals in the 100M hurdles with another personal best of 15.56.

“It all finally came together this year,” she said. “I finally figured everything out, and I couldn’t be happier.”

In the same event, Frederick senior Lilliana Martin, a four-year member of the Niwot gymnastics team, took third overall with a mark of 35-3.5.

James kicked off her impressive inaugural state meet by finishing third overall in the high jump with a mark of 5-5.5, behind Rylee Anderson of Silver Creek, who earned her fourth straight Class 4A high jump title with a jump of 5-7.5. On Friday, the Cougar ninth-grader captured Niwot’s only individual title of the weekend when she overtook Kasey Klocek of Green Mountain in the last 100 meters to win the 800M with a time of 2:13.55 seconds, another personal best.

“We came in a little slow, and then took off at 400M to go, which was a little rough, because I like to kick it in at the end,” James said. “It was a really good tactical race running against really fast girls.”

The Cougars also got a huge boost during the meet from their relay teams, all of which finished in the top six. On opening day, the 4x800M team of Timbang, Smith, Lucca Fulkerson and Samwrit Dishon took second overall with a time of 9:27.43, a season-best. Niwot nabbed another second-place finish on Friday with a time of 1:43.51 in the 4x200M relay (Timbang, Kayla Nowlin, Julea Trank, and senior Mackenzie Fidelak). The sprint medley team of Elise Gillett, Trank, Nowlin, and Elise Crall took sixth overall (1:49.94), while the 4x100M relay team (Timbang, Trank, Nowlin, Crall) was fifth (49.91).

“Our relays are really strong compared to last year, when we couldn’t even place in some,” Timbang said. The junior ran on four of the five Cougar relays, including the title-winning 4x400M. “Our team is really deep. We have Mary [Gillett], and Mackenzie, but we also have girls who can step up and do what needs to be done.”

Standout senior Mary Gillett was once again the Cougars’ top performer, despite failing to defend her titles in the 200M and 400M. Running four races in just under four hours on the final day, the Stanford-bound senior took second overall in the 100M with a season-best 12.21, picked up a pair of third-place finishes in the 200M (25.18) and the 400M (56.53), and took fourth in the 300M hurdles (44.97), the final event of her outstanding high school career. Afterwards, Gillett struggled to hold back tears as she talked about her team’s performance during the weekend.

“It’s been such a good four years with this team, and I’m just really proud of how everybody’s been competing,” she said. “I didn’t have my best state meet, for sure, but I know a lot of my teammates did, and that makes me super happy.”

Fellow senior Fidelak echoed Gillett’s sentiments after she took sixth in the 300M hurdles, which was also her final race. Earlier, she took third overall in the 100M hurdles (44.65), in addition to running a leg in the second-place 4x200M relay. Another Stanford-bound athlete, she ended her career with medals in 15 of 16 events at the state track meet, falling short only in this year’s long jump.

“I actually almost started crying coming off the track,” she admitted. “I don’t necessarily love the track aspect of it, but I love the team and the coaches and all the girls. Something that’s really special about Niwot is that we train so well together. The team is the goal and not the individual. I’m really going to miss that.”

Henriques said that talent like Gillett and Fidelak will be hard to replace, but he has every confidence that his girls team will be right back in the thick of the Class 4A title hunt next year.

“Our depth paid off,” he said. “The future is still bright. We’ll go back to work in two weeks and start all over again for 2019.” 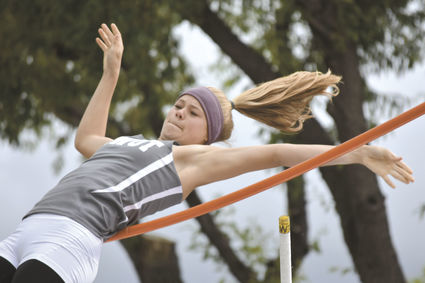 Photo by Jocelyn Rowley Niwot’s Erin Carroll took seventh overall in the girls 4A pole vault at the 2018 Class 4A state track & field championships on May 19.