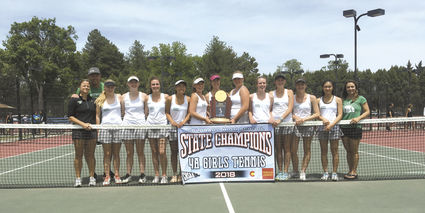 Led by upstart freshman Lucy Lu, the Niwot girls tennis team upended the Class 4A status quo with an impressive victory at the state tournament in Pueblo May 12. With wins in five of the seven championship brackets, and two more matches in the consolation finals, the Cougars dethroned nine-time defending champion Cheyenne Mountain to clinch the second girls tennis title in Niwot history. For head tennis coach Aimee Keronen, watching her team’s confident march to the ultimate prize during Saturday’s championship round was “super intense.”

It was clear after the opening day of competition on May 10 that Niwot would be a formidable obstacle to any other team’s title hopes, after all seven Cougar lines easily advanced to the quarterfinals and then to the semifinals. At No. 1 singles, Lu beat sophomore Keelie Bennett of Palmer Ridge (6-2, 6-1) then Hana Kimmey of Liberty (6-1, 6-1), while Lily Sieben and Erin O’Neill needed three sets to beat Longmont’s Tanna Carson and Felicia Archuleta to advance in the the No. 2 doubles bracket. After the first two rounds, Niwot led the team scoring with 21 points, followed by Cheyenne Mountain with 18, and Palmer Ridge with 9.

During Friday’s semifinal round, Niwot No. 3 singles player Julia Pentz toppled Emma Gaydos of Lewis Palmer, an opponent she beat in the No.1 singles bracket of the state meet in 2015 when both were freshmen. Lu faced off against 2017 runner-up Mavis Edwards of Durango, beating her 6-0, 6-1.

The Cougars ran into their first spot of trouble during semifinal rounds when senior Taylor Thulson dropped her match to Lewis-Palmer sophomore Austynn Crocker 3-6, 0-6 at No. 2 singles. However, she won a semifinal playback match in the consolation bracket, setting up a match for third place with Valor Christian’s Darby Warburton. Niwot’s No. 1 doubles pair of Tehnley White and Rachel Drake was also a Friday casualty, falling to Jessie Cleary and Izzy Watts of Mullen 3-6, 3-6. However, their advance through the consolation round late Friday was the linchpin for Saturday’s state title run.

“Our No. 1 doubles is the reason we went in with such confidence on Saturday,” Keronen said. Drake and White’s win over Palmer Ridge in the consolation semis meant all seven Niwot lines would be playing on Saturday, while the Indians had advanced just six lines to the finals. “They had to play through playbacks with the entire Cheyenne Mountain team cheering against them, and they weren’t even playing Cheyenne Mountain. Had our one doubles lost that match, the momentum would have shifted big time.”

Unfortunately for Cheyenne Mountain, momentum continued to favor the Cougars on the tournament’s final day. Pentz kicked off Niwot’s run on individual state titles with her win over Cheyenne Mountain’s Ariana Arenson (6-0, 6-2), another previously vanquished foe. It was her first individual championship, and a cornerstone of Niwot’s team victory.

“For four years, we’ve been almost there so many times with so many close matches,” Keronen said of the senior’s three prior post-season appearances. “I knew this was her year, and to beat Cheyenne just made it that much more awesome. Julia was the first one off the court, and the momentum from her match on just rolled across the board.”

Niwot’s coup-de-grace came in the No. 1 singles match, where Lu battled junior Josie Schaffer of Kent Denver in a back-and-forth thriller that featured a tie break to end the first set. Lu finally dispatched the two-time defending champion in a 7-6 (10-8), 6-2 upset, Schaffer’s first loss ever in the high school post-season.

“That was a big upset for Lucy, when she took out the two-time defending champion, and a girl ranked higher than her,” Keronen said. “When that happened, we knew it was our day.”

Emily Creek and Annie Heinritz were also repeat victors over Cheyenne Mountain, beating Zola Bzdek and Maggie Dwyer (6-3, 6-4) at No. 4 doubles to the claim a state title in their first state tournament appearance. Creek is now a two-time state champion in 2018, following her gold medal in the 2018 state slalom race back in February.

At No. 2 doubles, Sieben and O’Neill needed another three sets to put down their Cheyenne Mountain opponent, but were also repeat winners. Finally, the No. 3 doubles pair of Catherine Xiao and Maedee Trank-Greene claimed their first state crown with a 6-4, 6-4 win over Jordan Cleary and Tatum Maloney of Mullen. In the playbacks, Thulson came back to win the third-place match at No. 2 singles (6-4, 6-2), while Niwot’s No. 1 doubles pair finished fourth after losing the consolation match (6-3, 6-3) to Kent Denver. 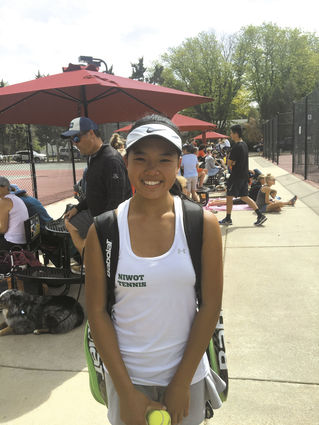 Courtesty Photo Freshman Lucy Lu claimed the No. 1 singles title with a win over two-time defending champion Josie Schaffer of Kent Denver at the Class 4A state tournament in Pueblo on May 12, 2018.

“For them to play with such confidence and composure is amazing,” Keronen said of her youthful doubles corps, adding that their work with a “mental coach” during the season was certainly a key part of their successful season.

“It just gave us that extra bit of confidence, which is awesome,” she said. “They obviously worked hard on the court, too, but I can pretty much guarantee no other team was working on the mental part, and that gave us an edge.”

Though Keronen will be losing three very important pieces to the title team in O’Neill, Pentz, and Thulson, she is confident that Lu and the rest of her young squad will have them right back in contention next season.

“We’re so young and deep, that I think we’ll be fine next year,” she said. “Especially with Lucy at the top. All of the girls are hard workers, so it should be good.”