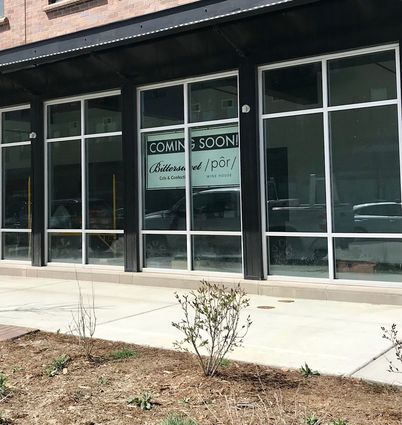 Photo by Vicky Dorvee Bittersweet Cafe and Confections /pôr/ Wine House is slated to open in Gunbarrel Center the first week of May.

There have been restaurants and stores to support Gunbarrel residents for quite some time now. But with the recent addition of large multi-family developments (over 300 new units) and many new businesses in the last few years, the sense of a warm, small town with a heart center is really starting to inch in.

Two Boulder-raised, longtime friends are adding to the village atmosphere with the opening of a café-by-day/libation-by-eve enterprise. Come the first week of May, Gunbarrel resident Mike Boselli and his business partner Patrick Walsh will be opening a double concept venture called Bittersweet Café and Confections and /pôr/ Wine House on the corner of Gunbarrel Center Court and Lookout Road.

Windows span the majority of the walls of the 2000-square-foot restaurant, the second location for Bittersweet /pôr/. The original location is on Main Street in Louisville and is owned by founders Walsh and his wife Azadeh.

The overall draw to the business will be the same as the popular first rendition, including the menu. The only departures are that instead of two buildings for the day and night versions, both will be housed in one space. Instead of the old town ambiance of the original duo, the new venture will have an industrial décor aligning with the vibe of Gunbarrel Center in which it will reside.

Across the street from Bittersweet /pôr /is the first restaurant on the main street of the residential development, Proto’s Pizzeria Napoletana, which opened two years ago. A third restaurant, Raglin Market, will be opening in August of this year.

Boselli is a veteran of the restaurant business. For 18 years, he and his family owned and operated McDonald’s restaurants. But he decided to forgo franchises for more individuality in the cuisine world.

Bittersweet /pôr/ will be the third concept restaurant in which he is part owner. For the past six years, the entrepreneur has also co-owned Press Play Bar on Pearl Street with his childhood friend and fellow Boulderite, Jesse Gossett. In early April of this year, Boselli opened Coabana Cuban Fusion Restaurant in Louisville with the Walsh’s and Gossett.

When asked why this location was chosen for Bittersweet /pôr/, Boselli said, “I live up the street and being a resident of that area, I knew that we needed a lot more stuff in that area to keep people from having to go to Boulder or Longmont. Living out here, I just thought it would be a great addition to the community and it would really fit well.”

For those with a hankering for something not so sweet, there are breakfast burritos, breakfast sandwiches and Big Daddy Bagels. And of course there’s coffee! Bittersweet’s signature brews come from single origin beans roasted in Lafayette. The menu choices for lunch are a variety of freshly made sandwiches on freshly made bread, healthy salads, and soups.

“It will be the perfect spot for people who want to come and do work from there,” Boselli said. “It will be a really nice place for everyone, from kids to adults.”

Late afternoon triggers the enterprise to morph into its bar persona - /pôr/ Wine House. For sustenance, patrons order from a variety of tapas (small plates) and made-from-scratch desserts. At the full bar, they feature tap red and white wines (yes, tap wine) from Gotham Project, along with beers and craft cocktail creations. On tap wines are touted to taste and stay fresher, save space and corking time, and be more environmental from a packaging perspective.

Food prices range from under $4 for an egg sandwich or a cup of soup to $10 for their most expensive menu items.

There will be happy hour specials each day and live music on Thursday, Friday and Saturday nights. The staff, when hiring is complete, will amount to more than 20 people. They are advertising for more hires.

Firing on all pistons, uber-busy Boselli is proud of Coaban Cuban Fusion’s distinctive cuisine and mixed drink selection. His more established Boulder venture, Press Play, is yet another notion altogether. It’s based on an 80’s vintage arcade concept and entertains everyone from young kids to adults. And now … for something completely different, yet tried and true for Boselli, there’s the arrival of Bittersweet /pôr/.

“We’re excited for the community,” Boselli said. “I live here and love it. It’s going to be fun-loving atmosphere with a good vibe, great products for customers that will really make them feel warm and welcomed. It’s going to be great for people not to have to drive; they can easily walk or bike over. It will be really fun to look out there and see friends and neighbors enjoying it.”