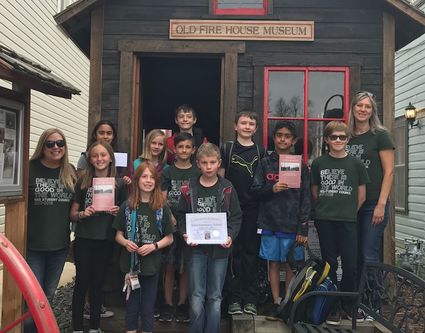 It might be presumptuous to say that more handwritten messages made their way through Niwot Elementary School (NES) than digital messages for a five day period, but it could be a close match. Here’s the figure — at least 1500 Lucky Grams were directed to students. And the sweet bonus an electronic message couldn’t begin to compete with — there was a Jolly Rancher or Starburst taped on each Gram.

Every year, the 12-member NES Student Council sells the candy-decorated Lucky Grams to raise money for an organization needing its support. This year’s recipient was the first local destination ever selected — Niwot’s Firehouse Museum on Second Avenue.

“This is an old place and needs repairing, so we wanted to help out,” fourth-grader Mason Freeman said. “My favorite part was mostly selling them and then thinking about the purpose of it.”

“We realized the museum has been moved around a lot. People really like it so we really wanted to donate to it to make it even better,” fifth-grader Ellie Ottem said.

Student council advisor and fourth grade teacher Kara Danielson said that to make the choice of where to donate, this year’s council members discussed previous recipients, most of whom were located in Longmont. The suggestion to donate to the firehouse came from Principal Nancy Pitz, and once the students heard about it, they thought it was the right thing to do because it would be the first time money would stay in Niwot.

“They were all about it, 100 percent all in to give to a truly local place,” Danielson said. “They were in charge of selling Lucky Grams before school, of organizing the money, organizing all of the grams into the correct boxes, and taping candy on to the grams.”

“We chose the museum because it’s donating to part of Niwot’s history and it’s such a cool place,” NES student council member Sam Clark said. “Selling was my favorite part of it, because it’s an entrepreneurial activity and you get to sell it, put the money in the money box, make the Lucky Gram and I like that.”

Niwot Historical Society President Kathy Koehler and fundraising committee member Felicia Santelli were both on hand to accept the $425 check from the NES Student Council and present the group with a certificate of appreciation.

Just when it seemed that texting, tweeting, and snapchatting are defining kids’ methods of communication, and that connecting on a more human level was becoming a thing of the past, the student council at Niwot Elementary School proved this notion to be nonsense.