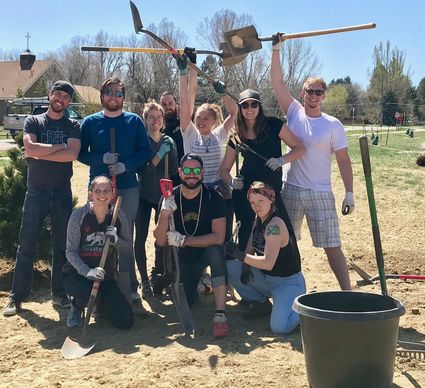 Parking spots were scarce at the Lefthand Valley Grange Park early last week while several crews were hustling to make headway on some finishing touches to the project. Three key elements were in the works this week – landscaping, work on the map kiosk, and laying down materials on the new trails.

Boulder County Parks and Open Space (POS) employees Cathy Thiltgen, an arborist, and Ari Addes, a POS volunteer coordinator, were working with volunteers to plant trees. Brian Bartel, a Boulder County park technician, was working on the map kiosk with his crew. And Chris Trujillo from the POS trails group was rolling and watering down freshly laid crusher fines on the new paths.

A high energy, good-humored team of 11 volunteers from Southern Sun Brewery in Longmont helped four POS staff members plant 25 trees in four hours. The trees were placed around the parking lot, the picnic shelter and at the parking lot entrance.

“Last spring, we transplanted four Pinyon Pines from their previous location at Lefthand Valley Grange Park to their new home west of the parking lot,” Thiltgen said. “These trees were originally planned to be demolished during the lot construction, but I thought there was a need for screening for the nearby residents. I am so glad I was approved to do this work.”

“Yesterday was one of the most enjoyable projects I’ve had,” Thiltgen continued. “The Southern Sun volunteers were friendly, enthusiastic, and willing to learn the proper planting techniques. They just kept moving and were smiling and engaging. I know we have larger projects, but from my perspective, it was a sizable job. It is important to plant the trees properly to give them a fighting chance.”

Six more trees will planted at the park this spring, but will need to wait for staged materials and equipment to be removed and for the installation of the new bathroom facilities to be completed.

“We have been trying to diversify our tree varieties,” Thiltgen explained. “This will be beneficial when other pests and diseases, similar to Emerald Ash Borer and Mountain Pine Beetle, reach our area. All of the trees are hardy for our area, tolerate our clay soils and are drought tolerant.”

Some passersby may have noticed there’s a celebrity tree planted to the east of the picnic pavillion. The tree is a clone of the Champion Cottonwood from Hygiene planted a few years ago, and was marked with a plaque that disappeared at some point, but has since been replaced.

“From 1968 until its death in 2012, American Forests (a conservation group) recognized this tree as the National Champion Cottonwood,” Thiltgen said. “POS collected samples from nearby trees which showed similar characteristics to the dead champion. We had genetic labs analyze and compare them to the champion tree. They are identical matches and are referred to as clones. We then collected twigs from the clones and the Colorado State Forest Service grew them out for us to plant. They were distributed to local communities and POS planted many of them on Boulder County properties.”

When asked what is planned next for the park’s landscaping, Thiltgen said, “Saturday, April 28, is National Arbor Day. We will be leading another volunteer event at Lefthand Valley Grange Park planting perennials and ornamental grasses on the new islands, kiosk area and west of the picnic shelter. The perennials chosen are drought tolerant and pollinator friendly.”

According to Wheeler, the grounds crew and other groups will be coming to complete the parking lot with wheel stops. Planting irrigation will be installed, and fencing will be completed by the end of April or early in May.

The final part of the project will be the installation of the prefabricated bathroom building. Originally planned to be pit toilets, regulations required that the toilets be upgraded to a flush toilet facility.

There were some complications with the placement of the building, so there will be a delay while POS is awaiting either an exception or a variance to the present setback requirements. Once the appropriate permits are in place, installation will be scheduled and the hopes are that it will be in place by June.

“I am confident we should be mostly done in the next few weeks,” Wheeler said.