Dispensary gets high marks from locals 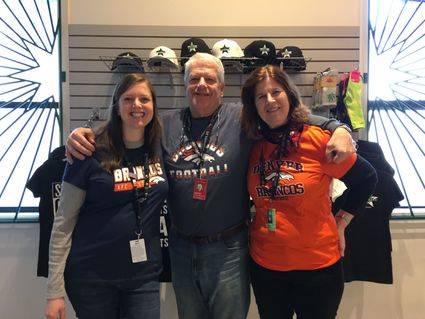 Googling Starbuds Niwot Marijuana Dispensary brings up nearly 50 reviews and a rating of five out five stars — happy customers across the board. And chances are that most of those reviews are from patrons who live within a relatively close radius of the store located on the southwest corner of Cottonwood Square Shopping Center.

One review reads, “Finally an awesome dispensary near me! Great little place, family owned operated and man do they have selection. Customer service is top notch.”

Owner Ernie Craumer said original predictions were that the dispensary would draw people from places other than the local neighborhood. But, after almost five months in business, it’s estimated that the majority of clients, 60 percent, live either in Niwot or Gunbarrel.

Craumer, his wife Callie, and their daughter Caitlin run the business, with Callie and Caitlin as the primary day-to-day managers. He believes that the family-owned feeling of the dispensary goes a long way in making people feel more at ease. They also have had no turnover in staff and that makes for great customer relationships.

“It’s not an intimidating place,” Craumer said. “The atmosphere here is professional and comfortable.”

Craumer estimates the average age of customers is older than 50. An increasing number of people in that age group are interested in the medicinal benefits of cannabis, he said. The store is a recreational marijuana dispensary, but those with a medical marijuana license receive a 20 percent discount.

“Most customers wanting the medicinal benefits fall into one of three categories - pain, sleep or post-surgery ailments - and are looking to cannabis in lieu of opioids or barbiturates,” Craumer said. “We have a budtender who is also a registered nurse and that helps a lot. We have a lot to offer older people in terms of relief.“

Educating clients is a big part of what Starbuds wants to be known for. They’ll be holding seminars to learn about cannabis and the vast array of product options. The staff is on deck to offer information every day to those who need it.

“One thing that I like is that we’ll have people come in and spend a half hour to an hour just discussing different issues solely for educational purposes and they don’t buy anything,” Craumer said. “Our approach is that we’re happy to educate people. People in their 80s come in and have some ailments and they’re worried if they use various things they’ll get high. Our staff is great at explaining what’s best to use medicinally. And I’ll be darned, two weeks later they’ll come back and realize the benefits.

“We’re also seeing a lot of people who grew up in the 60s and 70s, who had used recreational marijuana and are now coming back to it after 30 or 40 years because it’s legal. A lot them are taking an edible in lieu of alcohol.”

The store just experienced its first four-twenty (or 420). Each year, April 20 has traditionally been celebrated as a day to enjoy cannabis, especially en masse and in public places. Starbuds decided to have “The 7 days of 420,” a weeklong celebration of daily specials.

On the actual day of the event (last Friday) every special offered throughout the week was available, along with some new ones for just that day. Level Ten, a cultivator of cannabis, was in the store offering a special deal for their top-shelf cannabis.

The store is at a slight disadvantage compared to its competitors, Craumer said, because of the number of hours they are allowed to be open. Their hours are from 10 a.m. to 7 p.m. because when they were first approved by the County Land Use Department, Boulder dispensaries were only allowed the same hours. Craumer said it was a fair requirement then in order to not entice potential customers to drive to Niwot for marijuana after the other stores closed.

Since then Boulder hours have been extended to 8 a.m. to 10 p.m. Craumer said, and their location has just applied for a change in hours. They hope to get approval for longer hours than they have now, and will most likely opt to close no later than 9 p.m.

When the dispensary first opened, sales were slower than predicted. But, from its third month on the store has been profitable and Craumer reports sales are increasing from 25 to 30 percent per month.

“We’ve been very pleased,” Craumer said. “We bought the building in 2014 and it took us three and a half years to open. That hurt a little bit because competition had grown during that time and it had a small negative impact on our potential revenues. With the amount of competition now, success is reliant on how well a retail business is run. People don’t just flock to it because a store is open. Years ago it was a different story.”

When asked about how the city of Longmont’s expansion of marijuana licenses could impact the store, Craumer said, “I think it’s going to create some healthy competition. It has the potential to diminish our market share a little bit.”

Parlaying off their success in Niwot, the Craumer family will be opening a new Starbuds Dispensary on Ute Highway and 75th Street this May. The 400 square-foot retail space will share three of the Niwot dispensary’s now part-time budtenders, bringing them up to full-time and they will hire three additional workers for the new store.

When asked about the controversy that preceded the opening of the store, Craumer said concerns voiced by a small, but vocal group trying to block the business from getting approval have not played out. Some of the worries were that having a marijuana dispensary in Niwot would draw transients to this mostly suburban/rural-fringed area. Craumer said those concerns have not come to fruition and no one has tried to break into the building.

There were also articulated fears about patrons getting high on the premises or in the parking lot. Craumer said that the consumption of products is strictly not permitted on the property and never has occurred.

“There have been absolutely no incidents concerning safety or crime,” Craumer said. “And that is all positive news.”

Relocating from Connecticut to Colorado to start the business seems to suit the Craumer family very well, and as they had hoped, opening the business is filling the needs of the community too.

“This is a very fun business for us,” Callie Craumer said. “We are a wellness business, not just a highness business. I like to help people. Some people are skeptical, but the moment they get relief they’re happy.”