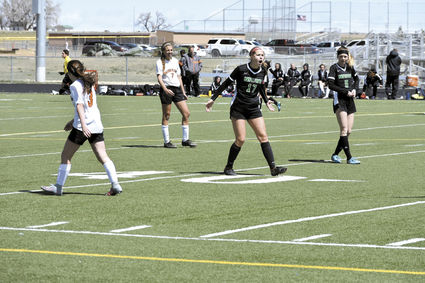 Photo by Jocelyn Rowley Senior Kenzie Pasma (17) challenges an official on a penalty call late in the second half during the game at Mead while Kiera Flanagan (5) looks on. Pasma was awarded a yellow-card as a result.

The Niwot girls soccer team managed just two goals in three games last week, but kept its conference championship hopes alive, thanks to consecutive shutouts by keeper Allie Colvin and the defense in two Northern league games. However, the Cougars’ failure to convert on scoring opportunities caught up with them against the substantially improved Mead Mavericks, and a 1-1-1 record in three games last week threatens their top-10 Class 4A RPI ranking.

Head coach Stephen Dimit was clearly frustrated after the 2-1 loss to Mead, and said that he is concerned about his team’s decreasing offensive output.

Conditions on the field were a significant factor throughout the April 14, game at Mead, as unremitting 40+ mph winds from the north significantly favored the team defending the north goal, which was the Mavericks in the first half and the Cougars in the second. Wind also made any sustained game play nearly impossible, as any pass with lift was almost inevitably blown out of bounds on the east sideline. Mead led 1-0 at halftime, but senior Anna McCarthy tied it up for the Cougars midway through the second half with her eighth goal of the season.

Shooting for the south goal, Niwot had several wind-aided chances to take the lead as the game wound down, but a solid effort by the Mead defense kept the Cougars from converting. A lucky break late in the second period put Mead’s Peyton Fox in a one-on-one with Colvin, which unfortunately, led to the ball going through her knees and into the net. Mead went on to win the game with a little help from the wind and some arguably uneven officiating.

The Cougars opened the week with a hotly anticipated match against cross-town rival Silver Creek. Coming into the game, the Raptors were undefeated and ranked second behind Windsor in the CHSAA coaches poll. Niwot, meanwhile, was hoping for a major comeback after an unanticipated 4-1 loss to Palmer Ridge on April 7, and a win over the Raptors would be a huge boost for their confidence.

The two teams did not disappoint the sizable crowd that gathered at Niwot’s field on a sunny Tuesday afternoon, nor fans of defensive soccer. Early on, it was clear that neither team was prepared to leave with a loss. Led by the senior trio of Kenzie and Roxie Pasma and Nazary Ramirez, the Cougars’ defense held the high-scoring Raptors to just a handful of chances during the game, which Colvin handled with confidence.

“Most of these girls are on our club teams, so we know how they are,” Kenzie Pasma after the heated match. “They’re super-physical, they’re super-aggressive, they jump up, win the balls out of the air, that’s how they always are. So that’s our biggest concern when we play them, to win the ball first and get it out of the air, because they have some players who are unbelievable in the air.”

Unfortunately for Niwot fans, Silver Creek’s defense was equally effective throughout the game, and good scoring chances by senior Anna McCarthy and freshman Kiera Flanagan late in the second half were thwarted. Tied at 0-0 after regulation, neither team gave ground during the first 10-minute overtime period. The stalemate was threatened late in the second OT after an apparent handball in the box by a Niwot player. However, the contact was deemed incidental, and no penalty shot was awarded to the Raptors. After 100 minutes of play, the game ended in a 0-0 tie.

“It’s always fun, and we always get hyped up,” Pasma said after tying their arch-rival. “The one thing I think we did differently this year is focus on our game, and that made us play a little bit better….That was a great team effort, and that’s what we’re going to take away from it.”

Though the Cougars didn’t get a win, Dimit was happy with his team’s composure in the game, and especially happy to see his defense pick up its fourth shut-out of the year.

“They were pretty fired up after giving up four goals,” he said. “To come out and get another shutout on the board, they take a lot of pride in that. They played really hard and really together today.”

Niwot picked up the sole win of the week on April 12 against league foe Centaurus, which beat the Cougars 2-1 in overtime last season. Senior Sage Marten and sophomore Natalia Storz combined for the game’s lone score, and with the 1-0 win, Niwot picked up its sixth win of the year, and second in the Northern league.

Niwot resumed conference play at Longmont (1-8) on April 17. The Cougars host Greeley Central on April 19, then head back out on the road to face Mountain View on April 24. 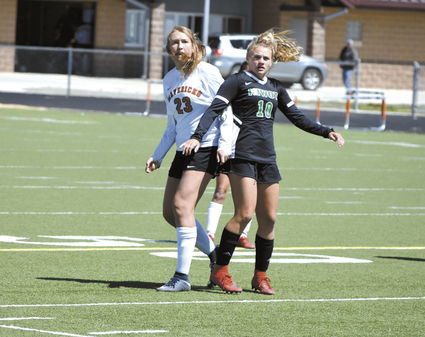 Photo by Jocelyn Rowley Niwot freshman Maddie Borncamp (10) waits for a pass against Mead on April 14.