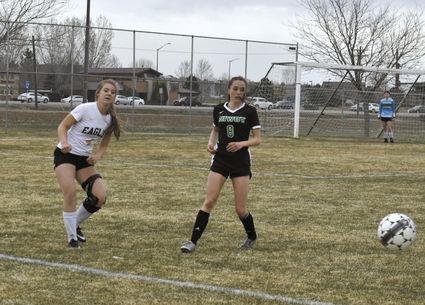 Photo by Jocelyn Rowley Junior Elise Crall (8) waits for a pass during Niwot’s conference opener against Thompson Valley on April 5.

Niwot opened its Northern League schedule on April 5 with a 2-1 win over the scrappy Thompson Valley Eagles, thanks to midfielder Elise Crall, who was in the right place at the right time not once but twice during the game’s first half.

Down at the other end of the field, senior keeper Allie Colvin and the Niwot defense deftly weathered not only the Eagles’ physical attack, but also some controversial officiating that had a lot of Cougar fans scratching their heads as the first half came to a close.

“It was another gritty game,” Niwot head coach Steve Dimit said after his team’s fifth win of the season. “We know every year that this game is going to be tougher than it should be because that’s just the way Thompson Valley plays.”

The Cougars got on the board in the eighth minute after Crall took a perfect centering pass from freshman wing Kiera Flanagan, and booted it past Eagles’ keeper Mia Beck to make it 1-0 Niwot. Twelve minutes later, Crall again found the back of the net after Thompson Valley failed to clear a corner kick.

“It was nice to see Elise Crall score two goals,” Dimit said. “She works so hard for us, and to get her actually on the score sheet is awesome.”

With two minutes to go in the half, Niwot keeper Colvin landed face-first after being upended by a Thompson Valley player during a save on a Thompson Valley direct kick, prompting a visit from the Eagles’ athletic trainer for a concussion evaluation, which forced Colvin to the sideline until the next substitution opportunity.

Thompson Valley was awarded possession and another direct kick (since they possessed the ball when the trainer came on the field), which went through the legs of Cougar backup keeper Quinn Gossett. Despite a vigorous protest by Dimit on behalf of Colvin (for which he was cautioned by the officials), the goal stood, and Niwot led 2-1 going into the break.

As the second half opened, the Cougars were down two senior defenders (Aria Carlston, who was out with a foot injury, and Nazary Ramirez, who retired at half time with leg pain). Dimit characterized the injuries as minor, and said such wear and tear is typical at this point in the season.

“We’re just a little bit banged up, and that’s going to happen on this six-game spread that we have right now,” he said. “We’re asking everyone to step-up, and we have a big enough team to handle it.”

Pressed into service were sophomores Sydney Lee and midfielder Lexi Crow, who normally plays defense with her club team. Colvin was impressed with how the young defenders held their own against the forceful Eagles attack.

“We knew they were going to be physical, and we knew that we were going to have to really play,” Colvin said. “It was making sure we didn’t let just one girl go by because that leads to one v. one, and that’s always a dangerous position. We were good getting the ball up and away so that we could transition.”

Colvin was back to form against the Eagles, and wasn’t afraid to challenge the aggressive Thompson Valley forwards when they came too close. She also came through with several outstanding saves in the second half.

“We’re so steady with her in the back,” Dimit said. “She just projects confidence, and I think everybody really feels comfortable knowing she picks up a lot of our garbage.

With the win against Thompson Valley and the 5-0 shutout of Erie on April 3, both Colvin and Dimit agreed that the Cougars seem to be back on track after a lopsided 8-0 loss to top-ranked Windsor on March 22. Against the Tigers, five different Niwot players scored, including Flanagan and her freshman teammate Maddie Borncamp, both with their first career goals.

“Every team will end up losing, that’s kind of a given,” Colvin said. “It’s really how you come back from that loss that shows where your team’s going. I think we did an excellent job coming out against Erie and then coming out here and playing another physical team.”

Unfortunately, the Cougars will have another chance to come back from a loss, after falling 4-1 on the road to much-improved Palmer Ridge on April 7. Junior Sierra Kepler scored Niwot’s lone goal, her third of the year.

Niwot resumed conference play at home against Silver Creek on April 10. The Cougars host Centaurus on April 12, then head out on the road to Mead on April 14. 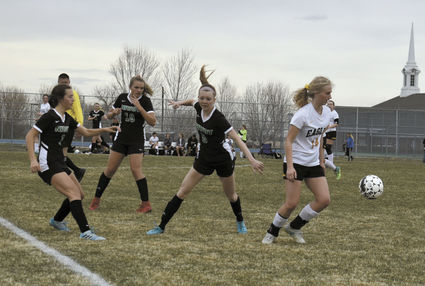