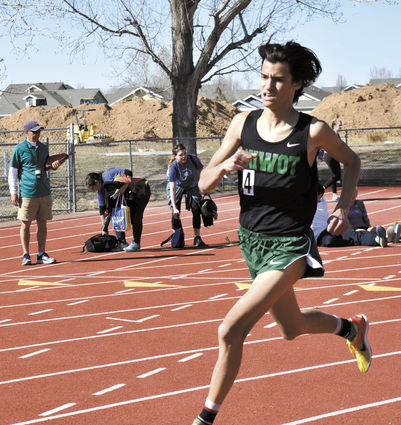 Photo by Jocelyn Rowley Niwot’s Cruz Culpepper competes in the 800M at the Windsor Invitational on March 17.

After head-turning performances in two recent high profile track meets, the son of two former Olympians is generating buzz not just in local running circles, but nationally as well.

On March 31, Culpepper took second in the 1600M at the Texas Relays, with a time of 4 minutes, 11.54 seconds, the fifth fastest high school time in this event so far this year. On April 7 in southern California, he took first in the boys mile race at the prestigious Arcadia Invitational with a time of 4:13.14, the third fastest national time, and the fastest time for a 10th-grader by nearly five seconds.

Culpepper said in an interview with Runnerspace.com afterwards that he “felt super comfortable the whole race, so I was able to have the strength to win.”

Niwot head track coach Maurice Henriques said he was not shocked by Culpepper’s abrupt emergence as a national standout.

As Henriques suggested, Cruz faces an uphill battle to the state 1600M title, despite his recent success. Senior James Lee of Silver Creek has the fastest times by a Colorado athlete for both the 1600M and the mile, despite Culpepper’s narrow head-to-head win over Lee at Arcadia. Also in the mix are Cole Sprout of Valor Christian and Carter Dillon of Mountain Vista, who finished 1-2 in last weekend’s Mullen Invitational with sub-4:13.00 times. Nevertheless, Culpepper is optimistic about his chances in May.

“It gives me a lot of confidence,” he told Runnerspace.com. “I was confident coming into this race after the Texas Relays, and this gives me more encouragement for State.”

Joining Culpepper in Arcadia was Niwot junior Ares Reading, who smashed his personal best in the 3200M by more than 20 seconds at the Texas Relays, finishing in 9:18.50 to place fourth overall. In the California meet, Reading improved by another four seconds (9:14.44), but finished only 12th in the ultra-competitive field.

“It was great to see Ares put that race together,” Henriques said of the junior’s performance in Austin. “He’s been training hard.”