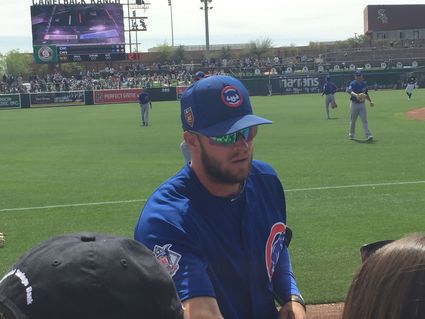 Valarie Allman (Silver Creek) is back for her senior year at Stanford after redshirting last season. Allman was far from idle, earning a silver medal at the World University Games in Taiwan, and setting the 12th-best discus mark in U.S. history. She opened the 2018 Track & Field season with a discus throw of 199.0 feet at the Stanford Invitational March 31, easily outdistancing the competition. In fact, all three of Allman’s throws would have won the meet, topping 184’5” each time.

Gabby Casey (Niwot) took second in the pole vault for Colorado Mesa University March 30 with a vault of 11’9.75” March 30. Earlier in the season Casey finished third in the Mines Nature’s Bakery Invite March 24, with a vault of 11’7.25”. She is a junior this season.

Alexis Carroll (Niwot) finished third in the 100M Hurdles for the University of Colorado at Colorado Springs at the Mines Nature’s Bakery Invite March 23-24. Carroll, a freshman, also finished fifth in the Long Jump with a mark of 5.44 meters.

David Bote, son of former Niwot High Coach Bob Bote, saw extensive action in spring training with the Chicago Cubs, appearing in 24 games, second –highest on the team, with 52 official at bats. Bote hit .269 for the spring, with one homerun and eight RBI. He was optioned to AAA Iowa in mid-March, but continued to appear in major league exhibition games, playing primarily second base and third base. He remains on the 40-man roster of the Cubs. MLB.com ranks Bote as the 14th-best prospect of the Cubs Top 30. Iowa opens the season April 5 and travels to Colorado Springs May 30.

Pate Katechis (Niwot) is hitting .255 for the University of Nebraska-Kearney, with six homeruns and 16 RBI. Katechis, a senior outfielder, has also scored 23 runs and his 13 doubles are second on the team. He was 2-4 at the plate with a run scored in a 7-0 win over Fort Hays State March 27.

Ford Ladd (Niwot) has a 3-2 record with a 2.45 ERA for New York University after six appearances on the mound. Ladd has posted 27 strikeouts in 33 innings, both tops on the team. The lefthanded sophomore also has one hit in four at bats for the year.

Skye Messinger (Niwot) is hitting .224 in early-season action for Kansas. Messinger, a freshman, has played in all 28 games, starting 15 while seeing action at both third base and shortstop. He has one homerun and has posted nine RBI. Messinger went 1-1 against Grand Canyon University March 21, a game attended by his former high school coach, Craig McBride. He came out of a 1-13 slump with three hits in a 12-0 win over Morehead State March 31, including a triple, with a run scored and three RBI.

Hunter Stevens has seen action in three games for Otero Junior College, with two hits in six official at bats. Stevens is a freshman outfielder for Otero.

Brooklyn DeLozier (Niwot) helped New mexico Highlands to a 13-4 win over Adams State March 19. DeLozier, a sophomore outfielder, had one hit and scored the go-ahead run in the victory. She also had a double and a walk, scoring one run, in a 5-2 win over Black Hills State March 30 after going 1-3 with a run in an earlier 7-4 victory that same day. On the season, DeLozier is hitting .288 with 13 runs scored, three homeruns and ten RBI. Her 13 walks lead the team.

Bailey Kleespies (Niwot) is hitting .381 for Colorado Mesa, with two homeruns, 11 RBI and 15 runs scored. Kleespies, a third baseman, has only one error on the season. She homered in a 6=5 win over Colorado School of Mines March 24. Former NHS teammates DeLozier and Kleespies were in opposite dugouts March 11 as Colorado Mesa and New Mexico Highlands squared off. Kleespies had one hit and one RBI in a 14-0 win, and also picked up another hit with a run scored in a 23-0 win the day before, in which DeLozier twice reached base on walks.

Jordyn Ballard (Silver Creek) has one hit in limited action for Black Hills State, but has driven in three runs for the Yellow Jackets. Ballard, a junior, has played in eight games, primarily as a pinch-hitter.

Meghan Waidler (Niwot) has seen limited action pitching for the University of Colorado at Colorado Springs this season. Waidler pitched against Colorado Mesa March 18, going two and one-third innings in a 17-0 loss. Waidler came on in relief and was the most effective pitcher for UCCS, allowing four earned runs. Her former NHS teammate, Bailey Kleespies singled in one plate appearance for Colorado Mesa. 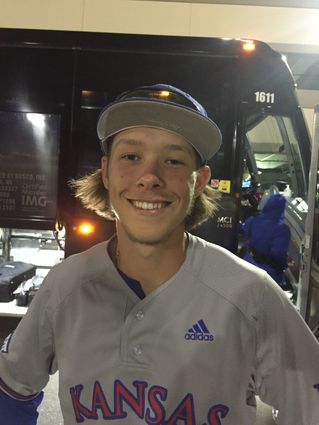 Photo by Bruce Warren Niwot High grad Skye Messinger played shortstop and third base for the University of Kansas against Grand Canyon University.

Grace Ladd (Niwot) has a 2-1 record pitching for Brown University in early-season action. Ladd, a freshman, has appeared in 12 games, all but one in relief, and has posted a 2.29 ERA, best on the team.

Max Petrack (Niwot) is playing No. 2 Doubles for Montana State this season. Petrack and his partner, Adrian Torrico, battled Boise State in what his coach described as “a hard-fought match” but ultimately lost 7-6 (7-3) March 18.