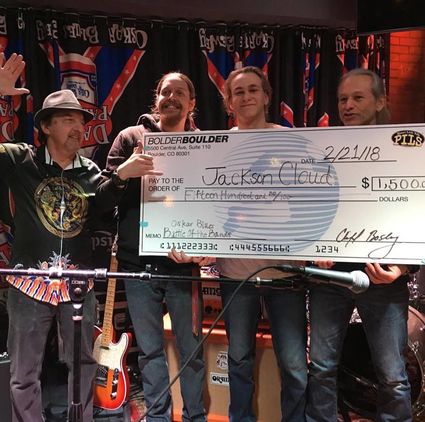 Photo Courtesy of BolderBoulder The Jackson Cloud Band shows off its prize for winning the 2018 Oskar Blues Battle of the Bands contest. From left: Art the bongo player, Nick Solga, Jackson Cloud, and Jeff Cloud.

When Niwot student Jackson Cloud’s eponymous band beat out Golden-based Thunder and Rain in the final round of the Oskar Blues Battle of the Bands contest last month, it is fair to say he was a little awestruck. At the tender age of 17, Cloud and his blues-infused classic rock combo band outplayed five other competitors to claim the 2018 crown and will perform on the Oskar Blues BolderBOULDER Expo Stage during the iconic race, which commemorates its 40th anniversary in May.

“I was surprised just because of how good that other band was,” Cloud said of the critically acclaimed bluegrass quintet. “They were really tight. They play a lot and they tour a lot, and Boulder’s kind of a bluegrassy place, so we were surprised when they went for a new rock band. It’s pretty awesome.”

Cloud credited an uptempo set list for his band’s success on the night, saying it really engaged the crowd.

“We did a mix of covers and originals, mostly high energy stuff,” Cloud said. “A lot of dancey tunes, so a lot of people got up and danced.”

It’s a pretty impressive feat for a band whose leader is still more than a year away from graduation.

Cloud received his first guitar as a Christmas gift in elementary school, and his natural affinity for the stringed instrument was immediately apparent. Cloud is largely self-taught, but he did receive“a couple of lessons” from a family friend when he was younger. Currently, he is the lead guitarist in the Niwot High jazz band, though the 11th-grader admits that he’s a more serious musician than student these days. Suffice it to say, his future ambitions are definitely musical in nature.

Cloud’s love of classic rock began early, passed to him by his father, Jeff. The two don’t just share an admiration for the golden age of adult album-oriented rock, however. The elder Cloud, impressed with his young son’s talent on the electric guitar, subsequently learned how to play the bass in order to further his son’s musical development, and is now an integral part of The Jackson Cloud Band.

The Jackson Cloud Band got its start when Cloud was in middle school, and has been through a few different iterations since. Its current lineup consists of Cloud on vocals and lead guitar, his dad on bass, Nick Solga on drums, and Art, the sound-system-owning bongo player, who is along “for the fun of it.” As for the band’s name, Cloud said it’s just a placeholder until the band’s membership is fixed.

“I don’t like it, I want a band name,” he said. “Once we know all the members are staying, we’re going to come up with a better one.”

To be sure, many songs on the band’s usual set list are bluesy rock standards, such as Voodoo Chile, Pride and Joy, and a generous helping of Led Zeppelin, Cloud’s favorite band. But there’s also a smattering of pieces from the 1990s and even some contemporary hits, such as Radiohead’s Burn the Witch. In other words, there’s a little something for just about every taste.

“We do country to reggae to classic rock, really recognizable tunes,” Cloud said. “Right now, we do ‘Twist & Shout’ and then go right into ‘Take on Me’, and that’s getting some cool reactions.”

The band also has a growing catalog of original material, thanks to Cloud’s other burgeoning talent, songwriting. So far, he has penned about 20 pieces, and the band performs several in its sets.

“The crowds are responding to the ‘rockier’ tunes, the catchier ones,” Cloud said. “I’ve got some long ones, and they’re hard to get the crown into. They’re the ones you have to listen to a couple of times before realizing, ‘Oh, this is cool.’”

The Jackson Cloud Band has seen its popularity grow tremendously over the past several months as a regular act on the Longmont craft brewery circuit, with recent shows at Oskar Blues, The Caribou Room in Nederland, and the late-lamented Powder Keg Brewing Company.

Not all venues are amenable to the underage Cloud, however, and the band sometimes loses out due to his youth. So far, that hasn’t seemed to dampen their popularity much. The band has upcoming shows at two popular Denver locations, the Walnut Room (April 14) and the legendary Herman’s Hideaway (March 28), which has been indispensable part of the metro rock scene since 1982.

“It’s going to be our first time in Denver, and I can’t wait to play there, I’m so excited,” Cloud said. “Those are the kinds of venues we want to be doing right now.”

The Jackson Cloud Band’s next local show is Friday, March 30 at Bootstrap Brewing’s Longmont location. If you miss them there, check them out at Grossen Bart Brewery on April 21, Left Hand Brewing on April 28 or Gunbarrel Brewing on May 12.

To see videos of recent performances or to hear some of Jackson’s original songs, check out the band on Facebook and at JacksonCloudBand.com.